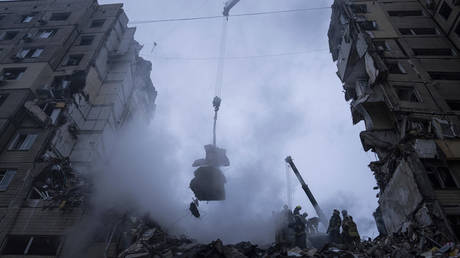 Melania Podoliak wants the entire nation “wiped off the face of the Earth” Workers clear the rubble from a destroyed apartment building in Dnepr, Ukraine, January 15, 2023 © AP / Evgeney Maloletka

Ukrainian blogger Melania Podoliak, a prominent guest on Western news channels, has demanded that Russia and its people be “wiped off the face of the earth.” Podoliak issued her call for genocide on Saturday after her own country’s air defense supposedly caused a Russian missile to hit an apartment block.

“It’s absolutely fair for me to wish for all Russians and Russia to be wiped off the face of the Earth,” Podoliak tweeted. “It’s not hate speech, it’s not horrible of me, it’s just FAIR.”

Podoliak shared an image of an apartment block in the eastern Ukrainian city of Dnepr, which she said was destroyed “after [a] Russian missile attack.” While Ukrainian President Vladimir Zelensky said that the building was hit by a Russian missile, his adviser, Aleksey Arestovich, admitted afterwards that the missile was shot down by a Ukrainian anti-air weapon, which caused it to hit the building.

It’s absolutely fair for me to wish for all Russians and Russia to be wiped off the face of the Earth. It’s not hate speech, it’s not horrible of me, it’s just FAIR.14.01.2013, Dnipro, a residential building after Russian missile attack. pic.twitter.com/4TPHYm13a8

Commenters on Twitter hammered Podoliak for being “pro-ethnic cleansing,” but the Ukrainian blogger stood by her statement, responding to critics with expletives. 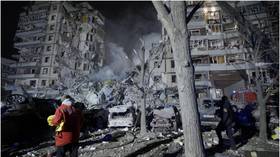 Read more:   Trump working to deliver on election promises, a rare thing in US

In a follow-up tweet on Sunday, she described Arestovich as “a f**king moron.”

Before calling for the deaths of 143 million people, Podoliak was lauded in the West. A former staffer in Ukraine’s parliament, she has been featured on NBC News as a “political activist” demanding the West send heavy weapons to Kiev, and on Fox News as a “media consultant” calling for sanctions on Moscow. On her YouTube channel, she offers viewers links to donate money to the Ukrainian military.

Russia’s defense ministry said on Sunday that Saturday’s missile barrage targeted “the military command and control system of Ukraine and associated energy facilities.” Moscow has repeatedly denied targeting civilians, stating that the missile campaign was launched against Ukrainian military and infrastructure targets in response to Ukraine’s “terrorist” attacks on its own infrastructure, including the Crimean Bridge. (RT)