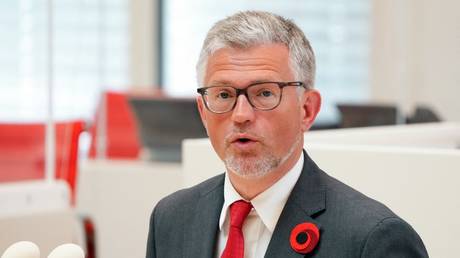 Andrey Melnik speaks during an event marking the 77th anniversary of the 1945 victory against Nazi Germany at the Brandenburg parliament in Potsdam, Germany, May 8, 2022 © AFP / Soren Stache

Ambassador Andrey Melnik is apparently angry at the pace of arms deliveries from Berlin Andrey Melnik speaks during an event marking the 77th anniversary of the 1945 victory against Nazi Germany at the Brandenburg parliament in Potsdam, Germany, May 8, 2022 © AFP / Soren Stache

Ukraine’s ambassador to Germany, Andrey Melnik, posted an image on Thursday implying that German weapons are being sent to Ukraine at a snail’s pace. Melnik has a long record of insulting his host nation.

Melnik posted an image of a snail with a bullet taped to its shell on his official Twitter account, along with the text “German weapons for Ukraine already on their way.” Claiming to have been sent the picture by a member of the government in Kiev, he added a dismissive “Pff. Russia must not win the war.”

Melnik’s post came a week after the German Defense Ministry announced it would deliver 15 1960s-era Gepard anti-aircraft vehicles to Ukraine in July, along with 59,000 rounds of ammunition and training for their operators. In April, Berlin authorized their manufacturer, Krauss-Maffei Wegmann, to deliver up to 50 units to Ukraine at the German government’s expense.

Berlin has also sent shoulder-fired anti-tank rockets and reportedly delivered seven self-propelled howitzers to Ukraine, but an earlier deal that would have seen 50 or more Leopard 1 tanks donated to Kiev fell through, reportedly due to a lack of ammunition and spare parts for the Cold War-era vehicles.

Melnik welcomed the delivery of the Gepard vehicles, but accused Germany of failing to display “imagination and courage” by sending more heavy weapons. In an interview with German tabloid Bild earlier this month, the ambassador asked for 88 Leopard tanks, 100 Marder tanks and more self-propelled howitzers, while he also called on Berlin to pass a lend-lease law to allow for an unlimited supply of arms and ammunition to Ukraine. (RT)