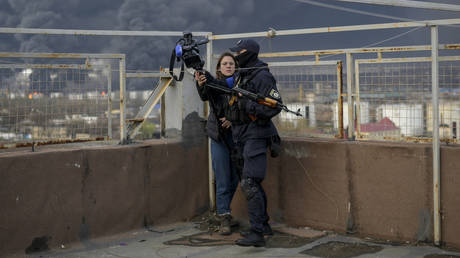 A Ukranian security officer keeps the press away from the site of an explosion in Odessa. © AFP / Bulent Kilic

Media are being denied access to certain areas, banned from filming, and occasionally detained, Reporters Without Borders said A Ukranian security officer keeps the press away from the site of an explosion in Odessa. © AFP / Bulent Kilic

Reporters Without Borders (RSF) has criticized Ukrainian authorities over “abuses” against foreign and local journalists covering the conflict with Russia. It urged Kiev to swiftly eliminate obstacles for the media.

“Some 9,000 or so reporters covering the war in Ukraine have difficulties gaining access to certain places and difficulties filming or taking photos, and even are occasionally detained,” the organization, which safeguards freedom of information around the globe, said in a statement on Friday.

Those “arbitrary restrictions” are complicating the work of the press in the field and should be lifted, it insisted.

“In a democratic country, war is no reason to hamper the work of journalists,” said Jeanne Cavelier, the head of RSF’s Eastern Europe and Central Asia desk. “Restrictions linked to national security are legitimate, but must be proportionate.”

However, RSF believes the Kiev government is creating “unjustified obstacles to the production of reliable and objective reporting” on the ground. (RT)