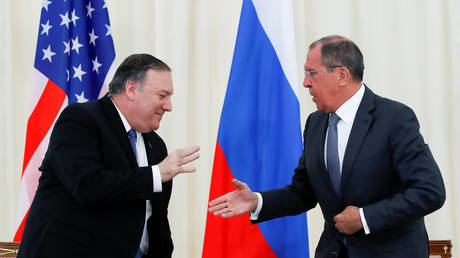 US Secretary of State Mike Pompeo and Russian Foreign Minister Sergey Lavrov in Sochi, Russia May 14, 2019. ©  Pavel Golovkin/Pool via REUTERS

While there is little hope that relations between Washington and Moscow will warm up, the fact that Russian Foreign Minister Sergey Lavrov is meeting with his US counterpart Mike Pompeo suggests they haven’t frozen over quite yet.

If unnamed diplomatic sources sharing insider information with news agencies are to be believed, Lavrov and Pompeo will discuss Ukraine, Syria, arms control and “other issues” between the US and Russia when they meet on Tuesday.

The last time Lavrov visited Washington, in May 2017, Pompeo was head of the CIA and US President Donald Trump had just fired FBI Director James Comey, setting off an avalanche of criticism among the media and Democrats that it was all related to the ‘Russiagate’ conspiracy theory – which was eventually debunked by special counsel Robert Mueller’s investigation this spring.

Also on rt.com Lavrov trolls NBC before Trump meeting as US media, Democrats lose it over Russia

To deal with ‘Russiagate,’ however, Trump has pursued a hard-line policy towards Moscow, expelling Russian diplomats, closing consulates, approving sanctions, and siding with allies such as the UK in their “highly likely” claims – but no evidence – against Russia. That has done nothing to appease or mollify his critics, however, while making any sort of cooperation with Russia on international security issues, counter-terrorism or nuclear disarmament that much more difficult.

The semi-official agenda for the Lavrov-Pompeo meeting is not terribly informative. What could they possibly discuss about Ukraine, when the two countries can’t even settle on basic facts? Russia maintains that it has no troops in the Donbass and that Crimea rejoined its motherland voluntarily, after a US-backed coup in Kiev. Meanwhile, Washington insists Russia “invaded and occupied” Crimea and the Donbass after freedom and democracy came to “Kyiv” with Victoria Nuland’s pastries.

Read more:   Manning ordered to appear before new U.S. grand jury as she is freed from jail

Russia sent an expeditionary force to Syria at the invitation from Damascus, and has been fighting terrorists ranging from Islamic State (IS, formerly ISIS) to rebranded Al-Qaeda, and everything in between. The US, whose troops are in Syria without legal invitation, has recently redeployed them to occupy oil wells and deny them to the government – which it never gave up on overthrowing.

Also on rt.com ‘Some good things can happen’: At NATO, Trump talks nuclear deals with Russia & China but his record tells another story

Intractable as those two issues may be, they are not an existential threat to the planet. Nuclear weapons are. Right now, the US and Russia are both observing a treaty, known as New START or SNV-III respectively. It is set to expire by February 2021, however, and there have been few signs the US is willing to extend it by another five years – much less negotiate a new one.