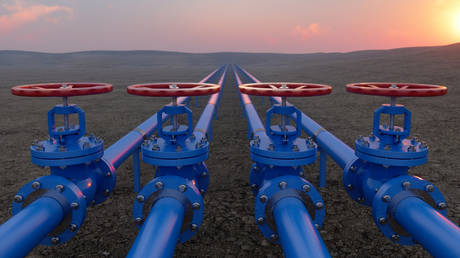 Kiev has the right to siphon off supplies destined for the EU, a Ukrainian politician claims © Getty Images / onurdongel

The former chairman of Ukraine’s parliament, the Rada, Dmitry Razumkov has stated that Kiev has the right to confiscate Russian gas that flows to the EU through Ukraine, and sell it in order to solve the country’s economic problems.

“The gas that is transported through the territory of Ukraine is Russian. To the border with Europe, it is Russian gas. And if we act in accordance with the law, we should confiscate it,” he said in a video posted on Facebook on Friday.

Kiev then could sell the fuel to Europe and use the proceeds to address its financial shortfalls, Razumkov suggested. He also called the confiscation of Russian property “a legal obligation” of Ukraine.

Russia is the largest supplier of gas to the EU, part of which is pumped via pipelines passing through Ukraine.

In December 2019, Moscow and Kiev agreed to extend the transit of Russian gas through Ukraine for the period of 2020-2024, with the possibility of extending the agreement for another ten years. The contract envisages transiting 65 bcm of gas in 2020 and 40 bcm annually from 2021 to 2024.

Back in 2006, parts of Europe were left without heat during one of the coldest winters on record after Ukraine started siphoning off Russian gas destined for the European market.