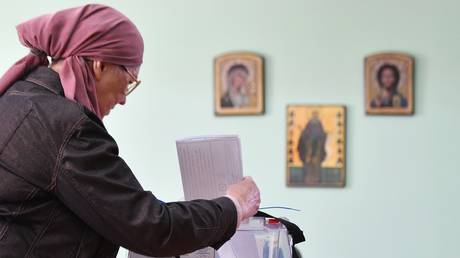 A woman votes in a referendum on the annexation of the Zaporozhye region to Russia at a polling station located in the monastery of St. Sava the Consecrated in Melitopol. ©  Sputnik

The Moscow-controlled region in southern Ukraine has voted in a referendum to join the neighboring country, early results show A woman votes in a referendum on the annexation of the Zaporozhye region to Russia at a polling station located in the monastery of St. Sava the Consecrated in Melitopol. © Sputnik

Residents of the Zaporozhye region in Ukraine, which is partially controlled by Moscow, have elected to break away from the country and join the Russian Federation. More than 93% of voters have supported the idea to split from Ukraine and join Russia, official figures show after all the ballots have been counted.

The referendum, which ran for five days alongside those in the neighboring Kherson region and in the two Donbass republics, concluded on Tuesday.

Most of Zaporozhye Region was seized by the Russian military early in the ongoing campaign that broke out in late February. The region’s capital, however, the city of Zaporozhye, remains under Ukraine’s control. Melitopol serves as the de facto capital of the Russia-controlled part.

Kiev and its Western backers have already rejected the referendums on joining Russia, denouncing them as a “sham” ballot, vowing to never accept them regardless of the outcome. Ukrainian President Vladimir Zelensky said the completion of referendums would “make it impossible, in any case, to continue any diplomatic negotiations” with Russia.