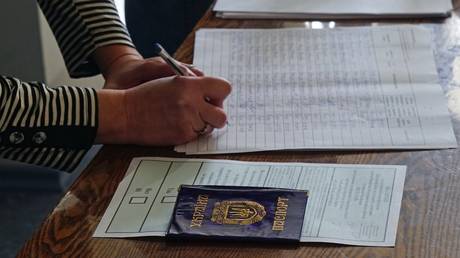 A woman registers at a polling station in Kherson to vote in a referendum on the accession of the Kherson region to Russia. ©  Sputnik/Ivan Rodionov

According to early referendum results, region of Kherson has opted to break away from Ukraine and become part of Russia A woman registers at a polling station in Kherson to vote in a referendum on the accession of the Kherson region to Russia. © Sputnik/Ivan Rodionov

Ukraine’s Kherson Region, largely controlled by Russian forces, has opted to break away from Kiev in a referendum, official results made public on Tuesday indicate.

Some 87% of voters have supported the idea to break away from Ukraine and join Russia, official figures show with all the ballots counted.

The polls were conducted in the region from September 23 to 27.

Russian forces took Kherson Region under control early in the ongoing conflict between Moscow and Kiev, which broke out in late February. In recent weeks, Ukraine launched an offensive to try and recapture it, but its military efforts have largely failed.

Kiev and its Western supporters have repeatedly condemned the referendums, denouncing them as a “sham” vote. Ukrainian President Vladimir Zelensky warned that the completion of the referendums would make any further diplomatic negotiations with Moscow “impossible.”