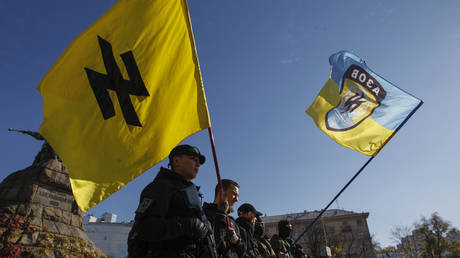 A state-sponsored Ukrainian ultra-nationalist paramilitary unit with neo-Nazi roots has accused a group of US lawmakers of slander after they suggested it should be listed as a terrorist organization.

The notorious Ukrainian paramilitary group Azov took offense after 40 US Democratic representatives called it just that in a letter to the State Department. Led by Max Rose (D-NY), the lawmakers asked why a “violent white supremacist” group “that openly welcomes neo-Nazis into its ranks” has still not been officially listed as a foreign terrorist organization by the US government.

They wrote that the shooter in Christchurch, New Zealand had ties with Azov and “routinely wore a neo-Nazi symbol associated with them.” The massacre, which left 51 people dead, directly inspired the recent mass shootings in Poway, California and El Paso, Texas, the lawmakers said, accusing Azov of “radicalizing” American citizens. (RT)