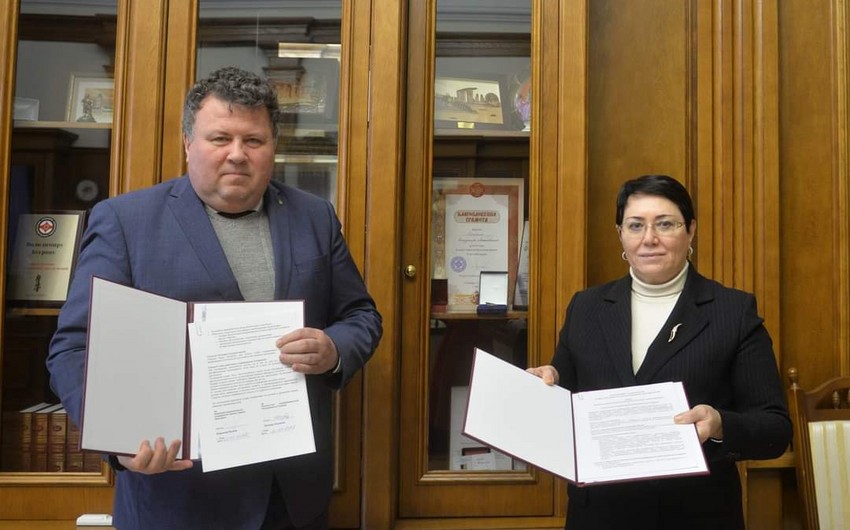 A Yusif Vazir Chamanzaminli auditorium will be created at the Kyiv National University to memorialize this historical figure of Azerbaijan, statesman, writer, first ambassador to Ukraine (1920).

According to Report’s Eastern European Bureau, the memorandum of understanding was signed by the rector of the Kyiv National University, Professor Vladimir Bugrov, and Azerbaijani Ambassador to Ukraine Elmira Akhundova.

According to the memorandum, auditorium No. 243 of the Faculty of Law of the Institute will be named after Yusif Vazir Chaminzaminli. The auditorium has been renovated with the financial support of the embassy.

In accordance with the memorandum, joint events of the Shevchenko University and the Azerbaijani embassy will be held in the auditorium, and the center itself will become a kind of cultural and educational center of Azerbaijan at this higher educational institution.

At the initiative of Ambassador Elmira Akhundova, the manuscripts, diploma, copies of documents and photographs from Yusif Vazir Chaminzaminli’s archive were handed over to the audience. A corner of modern independent Azerbaijan, national leader Heydar Aliyev and President Ilham Aliyev has also been created in the auditorium. Maps of the Azerbaijan Democratic Republic and the Republic of Azerbaijan, as well as a Karabakh carpet, are also displayed here.

A bas-relief of Yusif Vazir Chaminzaminli, the author of which is the People’s Artist of Ukraine, our compatriot Katib Mammadov, will be installed in front of the audience.