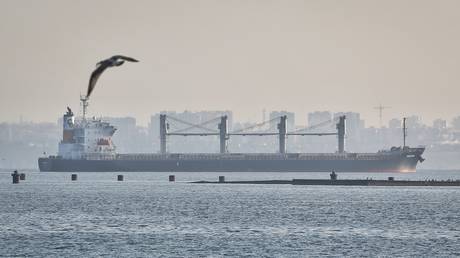 The cargo ship Navi-Star with a load of corn sails from Odessa, Ukraine, August 5, 2022. ©  AP/Nina Lyashonok

Ships using “grain corridor” are headed for Turkey, Europe and China, Kiev’s proclamations aside The cargo ship Navi-Star with a load of corn sails from Odessa, Ukraine, August 5, 2022. © AP/Nina Lyashonok

Even as the Kiev authorities declared help was on the way for “Middle East, Africa and Asia,” none of the grain ships that have departed Ukrainian ports by Tuesday are headed for African countries most at risk of starvation, according to the New York Times. Meanwhile, the first ship to leave under the “grain corridor” arrangement saw its cargo rejected by the buyers in Lebanon, who cited the delivery delay.

Since the arrangement went into effect on August 1, ten ships have left Ukrainian ports, carrying mainly animal feed to their destinations. One is headed to England, another to Ireland, while several are on their way to Turkey, Italy and China. None of them are bound for Yemen, Somalia, or other countries facing “catastrophic levels of hunger,” the Times reported on Tuesday. (RT)

The conflicts in the CIS, as well as the Russian-Ukrainian war, stem from the collapse…

If new restrictions target the energy sector, there will be no backing from Hungary, a…