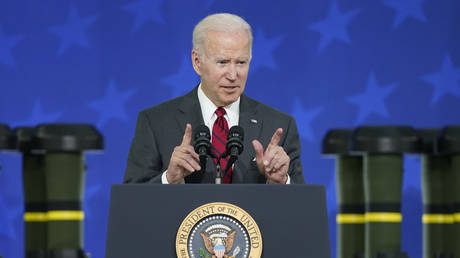 Joe Biden speaks on security assistance to Ukraine during a visit to the Lockheed Martin Pike County Operations facility in Troy, Alabama, May 3, 2022 © AP / Evan Vucci

At a missile plant in Alabama, President Biden bragged about Ukrainian parents naming children after Javelins Joe Biden speaks on security assistance to Ukraine during a visit to the Lockheed Martin Pike County Operations facility in Troy, Alabama, May 3, 2022 © AP / Evan Vucci

President Joe Biden on Tuesday described the conflict in Ukraine as a historic “inflection point [that] comes along every six or eight generations,” and described the US’ role in the conflict as fighting the first “real battle” in a civilizational struggle versus Russia and China. Biden also promised to send billions more dollars worth of aid to Kiev.

“We’re at an inflection point in history. It comes along about every six or eight generations,” Biden said, during a visit to a Lockheed Martin factory in Alabama, adding that “things are changing so rapidly that we have to be in control.”

It is unclear what the last “inflection point” referenced by Biden was, with six to eight generations describing anywhere between 100 and 200 years ago. However, Biden went on to describe the US’ mission in Ukraine in grander terms than simply shipping arms to an ally.

“There’s an ongoing battle between autocracy and democracy,” he said, referring to China and Russia as enemies of supposed Western “democracies.” The conflict in Ukraine, he added, is “the first real battle” in this clash of civilizations. (RT)