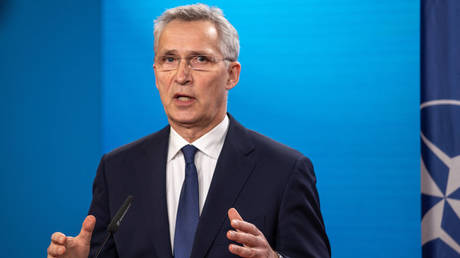 Ukraine can score a victory in its fight against Russian forces, as the situation on the battleground is not developing according to Moscow’s plans, NATO Secretary General Jens Stoltenberg claimed on Sunday.

Speaking to the reporters after the informal meetings of the military bloc’s foreign ministers, Stoltenberg revealed that the main topics of the discussions were “strong support for Ukraine, the further strengthening of NATO’s deterrence and defense, and the longer-term implications of the war,” including the alliance’s future stance towards Russia.

“Russia’s war in Ukraine is not going as Moscow had planned. They failed to take Kiev. They are pulling back from around Kharkiv, their major offensive in the Donbass has stalled. Russia is not achieving its strategic objectives,” Stoltenberg said.

He added that, contrary to the alleged wishes of the Russian President Vladimir Putin, Ukraine continues its fight, “NATO is stronger than ever” and the US and Europe are “solidly united.” (RT)