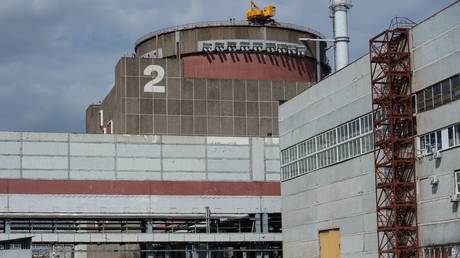 A view shows the 2nd reactor at the Zaporizhzhia nuclear power plant, as Russia's military operation in Ukraine continues, in Energodar, Ukraine. © Sputnik

Kiev’s General Staff now also says there are no Russian troops inside at the Zaporozhye facility A view shows the 2nd reactor at the Zaporizhzhia nuclear power plant, as Russia’s military operation in Ukraine continues, in Energodar, Ukraine. © Sputnik

The Ukrainian military publicly admitted striking the area of the Zaporozhye nuclear power plant in an official General Staff briefing on Friday. Previously, Kiev had claimed that Russian forces used the plant as a military base; now it says all troops have relocated due to the visit by IAEA inspectors.

“In the areas of the settlements of Kherson and Energodar, accurate strikes by our troops destroyed three enemy artillery systems, as well as an ammunition depot and up to a company of personnel,” said the General Staff of the Armed Forces of Ukraine during the daily briefing.

The military also claimed that, due to the arrival of the IAEA inspection team, the Russian “occupiers removed all military equipment from the territory of the Zaporozhye nuclear power plant. About 100 units moved to the plant ‘Atom Energomash’ and the rest were dispersed in the nearest settlements.”

Energodar and the Zaporozhye facility have been under Russian control since early March, and functioned without problems until drone and artillery attacks began in July. Kiev has argued that the shelling was a false-flag operation by Moscow to make Ukraine look bad, but also that Russia was using the plant as a base for heavy artillery and equipment.

Moscow has consistently denied the accusations, saying that only lightly armed guards were deployed at the facility to ensure its security. On Friday, Russian Defense Minister Sergey Shoigu said Ukrainian claims that Moscow was using the facility to attack Ukrainian positions “with long-range artillery systems” were “blatant lies.” 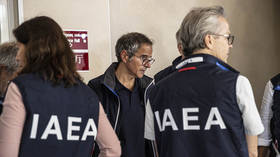 UN nuclear watchdog should be mistrusted ‘by default’ – Zelensky aide

“I state with confidence that we do not have heavy weapons at the territory of the nuclear power stations and in adjacent neighborhoods,” Shoigu said at a meeting in Moscow, adding that he hoped the IAEA inspectors would testify to this as well.

Shoigu also said there have been 29 attacks against the Zaporozhye facility since July 18, involving 120 artillery projectiles and 16 kamikaze drones.

The IAEA mission arrived at Europe’s largest nuclear power plant on Thursday, led by agency chief Rafael Grossi personally. Grossi said the IAEA planned to have a “continued presence” on the site. As the IAEA team was en route, a group of Ukrainian commandos used boats to land in Energodar and attempted to storm the power plant. Their goal, according to the Russian Defense Ministry, was to use the IAEA inspectors as “human shields.” However, Russian troops destroyed both the initial strike group and its reinforcements.

Read more:   Africa Cup of Nations postponed due to Ramadan