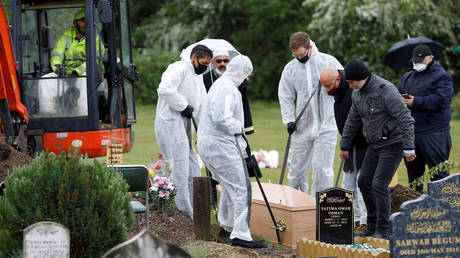 The UK has reported a daily increase of 1,820 new coronavirus deaths on the country’s worst day of the pandemic, with opposition MPs blaming Prime Minister Boris Johnson and the government for the shocking figures.

The deaths from the past 24 hours take the total number of those who have died within 28 days of a positive Covid-19 test to 93,290, while the number of deaths with the virus mentioned on the death certificate now stands at 101,880.

A further 38,905 Covid-19 cases were also reported on Wednesday, taking the UK to 3.5 million infections in total to date.

The latest data continues the downward trend in infections since England and the other nations entered their current lockdowns a fortnight ago.

The UK’s previous record death increase was on Tuesday, when 1,610 new fatalities were reported, meaning the current figures are much higher than mortality during the peak of the pandemic in April.

Opposition politicians blasted the government over the grim new milestone, including the deputy leader of the opposition Labour Party, Angela Rayner, who, in a statement, labelled the number of deaths an “absolutely horrendous figure”.

Another absolutely horrendous figure. We cannot become numb to these numbers and the unimaginable grief that lies behind them. We should not be here. It was not inevitable, far from it this is a direct result of Boris Johnson’s failure to learn from his own mistakes. https://t.co/7pEXEtfG56

“We should not be here. It was not inevitable – far from it. This is a direct result of Boris Johnson’s failure to learn from his own mistakes,” she said in a tweet.

Other Labour MPs described the death toll as a “catastrophe” of the government’s own making, and compared the UK’s numbers to the relatively small Covid mortality rates of other countries, including China. (RT)