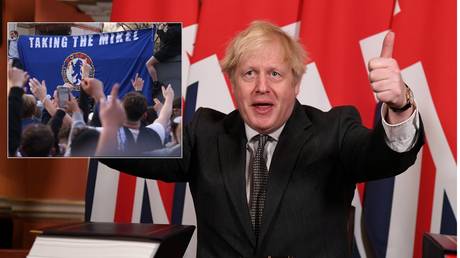 UK Prime Minister Boris Johnson has praised Chelsea and Manchester City as the two clubs were set to extricate themselves from the ill-fated European Super League (ESL).

Amid ongoing outrage from fans, the news broke on Tuesday night that Chelsea and Man City would look to back out of the breakaway ESL just hours after announcing they were among the 12 rebel clubs who would be part of the controversial new project.

The pair had been among six English teams – along with Manchester United, Arsenal, Tottenham and Liverpool – who were founder members of the ESL, which would be headed up by Real Madrid chairman Florentino Perez.

Criticism of the plans had spewed forth ever since they were announced on Sunday night, with UEFA and FIFA both suggesting that any players participating in the league would be banned from international football.

Threats were also suggested that the clubs should be kicked out of domestic competitions such as the English Premier League.

UK leader Johnson had been among the most prominent politicians to condemn the plans for the Super League, with claims it would lead to a ‘closed shop’ among the European footballing elite, disregarding the notion of free competition and also trampling over the wishes of fans.

As it emerged on Tuesday that City and Chelsea were set to walk away, Johnson urged others to follow in their footsteps.

The decision by Chelsea and Manchester City is – if confirmed – absolutely the right one and I commend them for it.I hope the other clubs involved in the European Super League will follow their lead.

“The decision by Chelsea and Manchester City is – if confirmed – absolutely the right one and I commend them for it,” Johnson tweeted.

Read more:   Entire Alpine Glacier might collapse any moment, and people are being evacuated

“I hope the other clubs involved in the European Super League will follow their lead.”

Speaking on Monday, Johnson had said he didn’t “like the look of these proposals” for the Super League and that they would be “very damaging for football.” (RT)