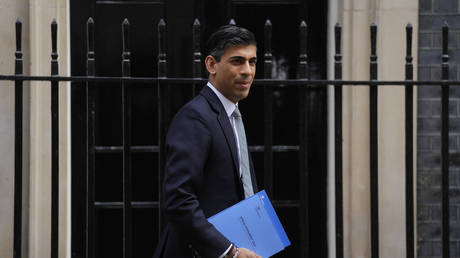 FILE PHOTO: Rishi Sunak poses for the media as he leaves 11 Downing Street for the House of Commons, March 23, 2022. © AP / Alastair Grant

The attack on novelist Salman Rushdie should become “a wake-up call for the West,” Rishi Sunak has said FILE PHOTO: Rishi Sunak poses for the media as he leaves 11 Downing Street for the House of Commons, March 23, 2022. © AP / Alastair Grant

UK prime minister candidate Rishi Sunak on Sunday called for a tightening of sanctions against Iran in response to the recent attack on novelist Salman Rushdie.

The Indian-born British-American writer was stabbed on Friday in New York State as he was preparing to give a lecture. A possible cause for the assault could have been his 1988 novel ‘The Satanic Verses’, which was condemned by Muslims for its allegedly blasphemous references to Islam and its holy book, the Koran. In 1989, Iran’s supreme leader, Ayatollah Ruhollah Khomeini, issued a fatwa calling for Rushdie’s death, and while Iran officially retracted this edict, an Iranian religious foundation placed a $3.3 million bounty on the writer’s head in 2012.

According to Sunak, the “brutal stabbing” of Rushdie should serve as “a wake-up call for the West” that should prompt Britain to designate Iran’s Islamic Revolutionary Guard Corps (IRGC), an influential branch of the Iranian Armed Forces, a terrorist organization. The IRGC is already deemed as such by the US and a number of other countries. (RT)