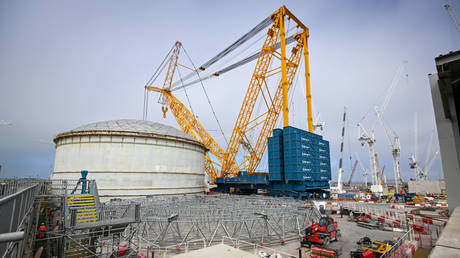 The UK government is removing China General Nuclear (CGN) from the Sizewell C project in what will be the first direct state funding of a new nuclear power plant in the country in over three decades, according to a statement from the Department for Business, Energy and Industrial Strategy (BEIS).

“The UK government’s investment in Sizewell C will support the project’s continued development … The investment also allows for China General Nuclear’s exit from the project,” the department said on Tuesday.

According to the statement, London plans to invest £679 million ($814 million) in the project, or 50% of the development costs. This will match the amount invested in Sizewell C by French power major Electricite de France (EDF).

Read more:   How many #DefenderEurope troops does it take to clear fallen trees from a road? US & British troops show master class!

BEIS has not disclosed what part of the investment will go to CGN, but noted that it would include buy-out costs, any tax due and commercial returns on the company’s work to date.

The Chinese company had a 20% stake in the project under a deal signed back in 2015. It was to help finance and develop a total of three nuclear power stations in the UK, being a minority partner with EDF at Hinkley Point C and Sizewell C power plants and a lead developer at a plant in Bradwell, Essex.

Hinkley Point C is currently under construction, and CGN remains a partner in the project. Sizewell C is in the early development stages, and officials say they will need to attract private investors to fund the project further. There has not been any information regarding the fate of the third power plant so far.

The Sizewell C announcement came after repeated calls within the UK government for lowering China’s involvement in the country’s energy supply and cutting ties with the world’s second-largest economy altogether. On Monday, UK Prime Minister Rishi Sunak said that the “golden era” of UK-China relations was “over,” adding that Beijing posed a “systemic challenge to our values and interests.”

British armed forces have been “hollowed out by spending cuts,” General Richard Barrons has said…