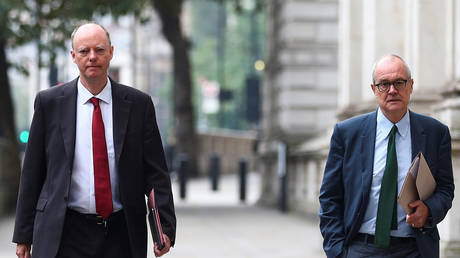 The British government’s top scientific advisors have issued a stark prediction: 50,000 cases of Covid-19 by mid-October and up to 200 daily deaths. However, the pair have been accused of needless doom-mongering.

Chief Medical Officer Professor Chris Whitty and Chief Scientific Advisor Sir Patrick Vallance addressed the public on Monday, and their demeanor was stern. Britain, Whitty said, had “turned a corner” in the fight against the deadly coronavirus, in a “bad way.” Vallance then explained that new cases are “roughly doubling” in the UK every week, and left unchecked, he predicted there could be “something like 50,000 cases in the middle of October per day.” Concurrent with this would be “200-plus deaths per day.”

“The virus has genetically moved a bit, but it has not changed in terms of its propensity and its ability to cause disease and to cause death,” Vallance said. “There’s no doubt we’re in a situation where the numbers are increasing. I’d like to remind you just how quickly this can move.”

Vallance and Whitty’s prediction is just that: a prediction. It assumes that the current growth rate will continue exponentially, and that deaths will rise proportionally. Predictions, however, can be wrong. Modelling by Imperial College London in spring suggested that half a million Britons would die of Covid-19. This modelling informed the government’s ‘stay at home’ policy, before it was revealed to be founded on faulty data. Its projected death toll was revised down to 20,000, a figure that was wrong too, as nearly 42,000 have died so far.

For cases to double every week, the virus would need a daily growth rate of just over 10 percent. However, current government estimates put the daily growth rate somewhere between two and seven percent. Should that rate remain the same, Valance and Whitty’s prediction would be twice as severe as reality.

The two advisers also dismissed the notion that the virus was growing less deadly, despite death rates across Europe dropping off in recent months, and claimed that the increase in cases was not driven by an increase in testing.

The pair were accused online of fearmongering, with their worst-case scenario described as something from “a bad horror movie.”

Modelling has been disastrously wrong for Covid , Swine Flu, SARs , MERs, bird flu etcWhy would the population agree to be guided by such modelling again, when freedoms, livelyhoods and family interaction is at risk.THIS IS LIKE A BAD HORROR MOVIE

It’s the #Whitty and #Valance show right now. I cannot contain my anger at their lies and fearmongering. This doesn’t look good.

Government policy.Send Whitty and Valance out to terrify everyone Leave it 24 hoursHave Boris bumble about a fucking moon shot or whatever shite he has made up this week

Watching the Whitty/Valance press conference and it’s absolutely soul destroying tbh. One big never-ending, smothering wave of shite. Guarantee there will be a new lockdown announced this week.

Some commentators took the ominous briefing as a sign that the government is preparing to implement a fresh round of lockdown measures. Ministers reportedly debated a host of potential new restrictions over the weekend, and Prime Minister Boris Johnson is due to address parliament on Tuesday, after a round of emergency meetings on Monday afternoon. (RT)