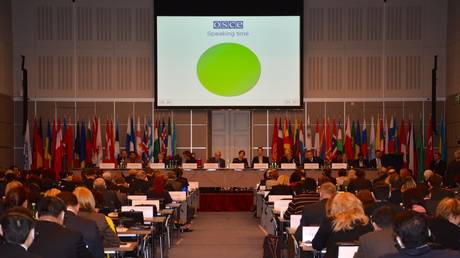 The UK has denied visas to Russian lawmakers who were planning to attend the Parliamentary Assembly of the Organization for Security and Co-operation in Europe (OSCE) in Birmingham, senator Vladimir Dzhabarov has told the media.

Speaking to news outlet Ria Novosti on Wednesday, Dzhabarov, who is the first deputy chair of the Russian Senate’s committee on foreign affairs, explained that since all members of the delegation have been sanctioned by the UK, the lawmakers had asked the OSCE Parliamentary Assembly’s leadership and Russia’s foreign ministry to help them get British visas.

“Unfortunately, we have received essentially an outrageous response, saying that the UK government cannot issue visas to the Russian delegation, regardless of what they are traveling for,” the senator said.

Read more:   Trump lashes out at media for blaming 'Russia, Russia, Russia' for hacking, says it 'may be China'

The OSCE Parliamentary Assembly will convene on July 2 and will be in session until July 6.

Dzhabarov noted that Moscow will not recognize any decisions passed by the Assembly in the absence of its delegation. (RT)