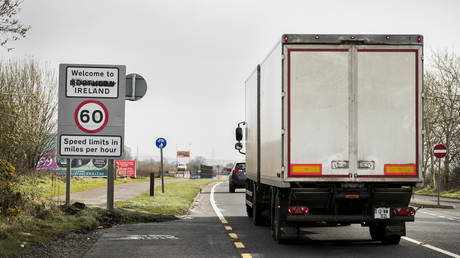 A lorry crosses the border from the Republic of Ireland to Northern Ireland on the Buncrana Road outside Londonderry. © Liam McBurney/PA Images via Getty Images

The British government has called for a new deal with the EU to resolve current trade issues between Great Britain and Northern Ireland, as the UK’s Brexit minister, David Frost, warned “we cannot go on as we are”.

Frost expressed his discontent at the current Northern Ireland Protocol element of the UK’s Withdrawal Agreement, telling Parliament on Wednesday that the deal needed a “significant change”.

The Brexit minister called for a revision of the deal to strike a “new balance”, with “the relationship between us and the EU no longer policed by the EU institutions and the [European] Court of Justice”. Instead, the new agreement would hopefully embody more of a “sense of genuine and equitable partnership”, he added, while warning that “we cannot go on as we are”.

However, Frost also said that, while there was justification for invoking Article 16 – which permits either party, London or Brussels, to suspend parts of the treaty if extremely negative circumstances arise – it would not be the best action to take at present. (RT)