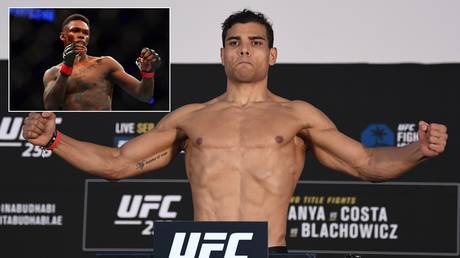 Paulo Costa cranked up the animosity with Israel Adesanya ahead of the pair’s UFC 253 middleweight title showdown as the Brazilian challenger shared a decapitated image of his rival.

The unbeaten duo face off on Fight Island this weekend for the middleweight belt currently owned by Nigerian-born New Zealander Adesanya.

Tensions between the pair had largely bubbled under the surface during the build-up to the bout, but tempers finally flared at Friday’s staredown when Costa tossed a white judo belt at his rival, in an apparent sign of his disdain for Adesanya’s grappling game.

Also on rt.com WATCH: Dana White caught in the middle as Adesanya and Costa staredown erupts ahead of UFC 253 headliner

Now, the 13-0 Costa has upped the ante more, taking to his Instagram account to share a gory image with his 1 million followers of himself holding the head of a decapitated Adesanya, along with the message: “Let’s erase them all.”

Adesanya, who stands 19-0 in professional MMA, has vowed to neutralize the feared striking threat from ‘Borrachinha’, who has finished all but one of his 13 opponents inside the distance – including nine in the first round.

“People say it’s the fight of the year, like Dana White said. But that’s only if he’s tough enough to actually take a beating from me for five rounds. But I just don’t think his gas tank is gonna hold up,” Adesanya warned.