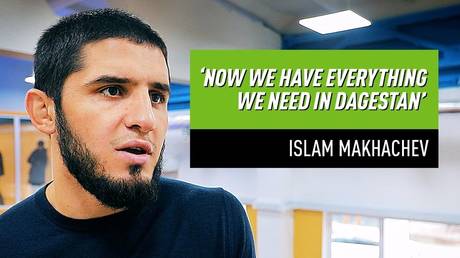 Islam Makhachev was at the opening of teammate Khabib Nurmagomedov’s new MMA academy in Dagestan, and said that the new facility had the potential to be valuable not only to pro fighters, but also the local community.

Chatting to RT Sport during the gym’s official launch day, UFC lightweight contender Makhachev said that it was important to ensure the gym helps nurture and educate the next generation, as well as help elite fighters sharpen their skills.

“Yes, we need to teach the next generation the stuff we were taught,” he explained.

“It’s very important that it’s not just professionals training in the gym. There has to be someone behind us, so they can grow up watching us. It’s not necessary that everyone comes out of the gym a champion. If they don’t end up being a champion they’ll grow up to be a decent person.”

Also on rt.com ‘A dream come true’: Khabib opens own gym to train Dagestani MMA stars of the future

Makhachev said the gym would eventually become a community hub, where local youngsters can learn and develop their minds as well as their martial arts skills. And the UFC star admitted the facility may produce successful people who aren’t professional fighters, and if that was the case, that would be a big success for the gym, too.

“We plan to build an educational facility here – a kind of school,” he explained.

“We have the space for it, two more buildings just like this one. We can have one of those building as a learning facility. Anyway, it’s important to develop this part. We don’t need just fighters alone, we need good doctors and specialists as well.”

The new gym’s opening also coincides with the next chapter of Makhachev’s MMA career. Now firmly established as a legitimate contender in the UFC’s talent-packed lightweight division, he said he wants to use the new facility as part of his regular fight preparations, and hopes his fellow countrymen in major MMA organizations around the world will join him and do the same.

“I’m starting an important stage in my career,” he said.

“I’ll be facing tough opponents so it’s good that I can train locally and not travel to different countries, different gyms. I can complete my camps here because we have a cage in the gym, all the equipment and just everything you need to be successful.”

And even though Makhachev has trained in facilities all over the world – including his second training home at the American Kickboxing Academy in San Jose, California – he said the new gym in Dagestan stands up well to comparisons when it comes to providing the facilities a top fighter needs to succeed.

“I won’t compare which gym’s better, which is worse (but) this gym definitely doesn’t fall short,” he said.

“Because what does a good fighter need? He needs a cage for the competing fighters, mats, treadmills – what else? I don’t know what else someone would need.”