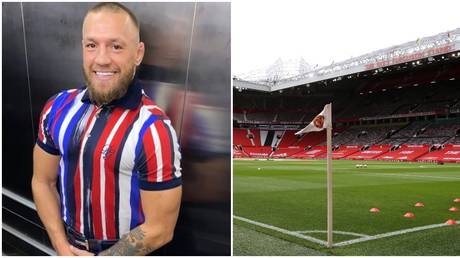 Conor McGregor made a cheeky pitch for Man Utd as chaos reigned over the Super League plans. © Instagram / Reuters

UFC megastar and Manchester United fan Conor McGregor has offered to buy the Old Trafford club in a cheeky tweet amid the carnage unfolding as plans for a new European Super League crumbled on Tuesday night.

United were one of 12 teams to announce they would be part of the breakaway new Super League on Sunday night, triggering widespread outrage among the Old Trafford faithful amid broader opprobrium in the football community for the ill-conceived plans.

By Tuesday, the new league appeared on the brink of collapse as the news broke that Chelsea and Manchester City – two other teams who had also signed up for the project – were preparing to withdraw from the league just days after it had been born.

One of the casualties of the chaos was Manchester United vice-chairman Ed Woodward, who reportedly resigned from his position after a backlash from fans.

Other United fans turned their ire on the club’s widely despised American owners the Glazer family, with co-chairman Joel Glazer facing calls to follow Woodward out of the door.

Capitalizing on the chaos was McGregor – a United fan since his childhood and with a net worth of around $120 million, although potentially far higher after he reportedly sold his stake in his Proper Twelve Whisky empire.

“Hey guys, I’m thinking about buying Manchester United! What do you think?” McGregor wrote on Tuesday in a tongue-in-cheek tweet.

Hey guys, I’m thinking about buying Manchester United! What do you think?

With the club valued at more than $3 billion, it seems even a man of McGregor’s deep pockets might struggle to stump up the requisite funds, as much as he would like to step in as a United fan.

I see my son when I look at this. Thank you for sharing. This is a picture from my schools “sports day”, and that infamous Grey Utd jersey, I actually bought myself with my communion money at 8 years of age. I’d love to know where it is now.A truly Notorious football jersey! https://t.co/1NxLZYJMXt

McGregor chimed in after plans for the European Super League lay in ruins as it emerged that Chelsea and Manchester City were set to withdraw, and potentially a number of the other 12 ‘founder’ teams of the competition.

Pitched as ‘the future of football’ by its initiators, the 20-team competition would be a direct rival to the UEFA Champions League.

The Super League would see teams play midweek matches in two 10-team leagues across a ‘season’, before the top clubs would meet in a knockout competition starting at the quarter-final stage.

The fifteen ‘founder’ teams would be permanent members of the league, while five others would join annually on an as-yet undetermined basis.

The plans now seem dead, however, with all eyes on the Super League’s chairman, Real Madrid boss Florentino Perez, and whether he will attempt to somehow press ahead with the dying project.