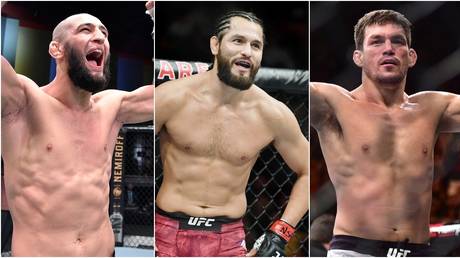 UFC boss Dana White confirmed this week on Fight Island that Chimaev – who last weekend picked up a third UFC victory in the space of 66 days – is set for main event billing in a five-round contest against a ranked opponent in Las Vegas later this year.

Chimaev, 26, has expressed his wish to face veteran grappling legend and current number 6-ranked welterweight Maia, 42, but told Russian agency TASS that the Brazilian had turned down the opportunity.

“They told us that [Maia] turned down the fight,” Chimaev said.

The Swedish-based star has set the UFC alight with his record-quick run of three victories, including two in the space of 10 days on Fight Island in July.

In his last outing at UFC Vegas 11 on September 19, Chimaev needed just 17 seconds to finish American veteran Gerald Meerschaert with a brutal one-punch KO to win their middleweight contest.

Chimaev – known as ‘Borz’ or ‘The Wolf’ – also told TASS that he would welcome a meeting with fan favorite and recent welterweight title challenger Jorge Masvidal.

“Masvidal wants to fight [Nate] Diaz. If [a bout] doesn’t work out with Diaz, then our fight is possible,” Chimaev is reported as saying.

Chimaev stands 9-0 in professional MMA, and trains out of the Allstars gym in Stockholm, home to the likes of Alexander Gustaffson.

After Chimaev’s 17-second destruction of Meerschaert, UFC boss Dana White said the Chechen-born star is “like nothing I’ve ever seen before.”