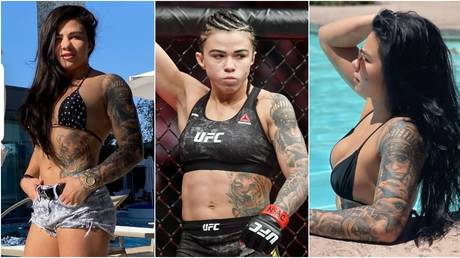 UFC siren Claudia Gadelha is an enigma of good looks and stunning skills inside the cage, and in a heartfelt message to fans on Instagram she has called for women to make sure that they are aware of their own worth.

Former two-time title challenger Gadelha is known for being one of the most fearsome female fighters on the face of the earth but as stern as the Brazilian strawweight queen is in the cage, she appears equally inspiring outside of it.

But if Gadelha is known by most for her outstanding submission skills where she takes glee in wrapping her arms around her unfortunate opponents’ throats, she rarely strays too far from her softer side – as she once again showed off on social media.

“When you teach your daughter that her body is only pure untouched you are teaching her that she can be ruined at the hand of man,” she wrote on Instagram.

“Raise your daughter to know that she owns her body whether it is for a woman, man or anyone to see. Teach your daughter that she is a gift so she knows her worth but doesn’t feel shame in share her beauty.

“Remembering that beauty comes in so many different forms, just like love, it have so many different languages. The beauty of doing whatever the heck makes you happy and seeing people doing their fund instead of being funded is the most attractive thing in the world. Other than a beautiful and pure heart, of course. Amen to that?”

Prior to that, ‘Claudinha’ had registered an impressive sequence of wins against Angela Hill and Randa Markos.

The 32-year-old hasn’t competed since her defeat to Xiaonan last year and hasn’t yet signed a bout agreement for what would be her first trip into the Octagon in 2021 after having had successful knee surgery in January.