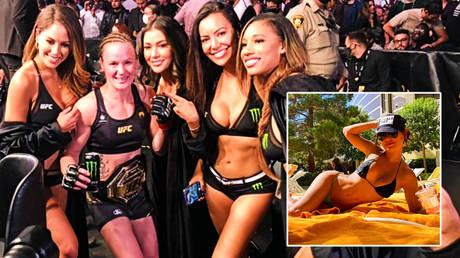 The 29-0 retired Russian made his comments at a press conference to promote his Eagle Fighting Championship, dubbing the girls who typically appear between each round “the most useless people in martial arts”.

The remarks led to a mixed response among figures in the sport, including jibes from bitter foe Conor McGregor and a reaction from Shevchenko in which she said that it was “so not right” to talk about the girls in such a manner, calling them a “huge part of any promotion”.

Following her fourth-round TKO victory over Lauren Murphy at UFC 266 on Saturday, the Kyrgyzstani-Peruvian made a point of approaching the ring girls and posing with them for a photo.

“Beautiful women are a decoration of any event. I want people to know that, and no one has the right to say that they are useless because they’re at the place that they have to be,” Shevchenko said after her victory.

“They were here at the beginning. You [can] come to any event [and] you will see beautiful women. A man, everyone enjoys it – it’s kind of like beautiful, right? This is a decoration.”

On Monday, the 33-year-old took to Instagram and doubled down on her message by posting the snap with a quartet of ring girls and writing: “Beauty will save the world.”

Literary great Dostoevsky originally came out with the enigmatic line in a bid to encapsulate how beauty transcends aesthetics.

Perhaps the most famous of all ring girls, Luciana Andrade, was clearly impressed, leaving a love heart for Shevchenko and replying: “It’s the women supporting women, for me.”

Its the opposite lol, everyone blew up once khabib shared one opinion and yall STILL talking bout it.

Others left memes and comments about Nurmagomedov, with one writing: “Khabib has just left the building.”

Some argued that the Dagestani’s remarks, in which he spoke of how he had felt uncomfortable being near ring girls at an event he attended with his legendary late father, Abdulmanap, have been blown wildly out of proportion.

“It’s the opposite,” said one, responding to a suggestion that Nurmagomedov would be annoyed by Shevchenko’s post.

“Everyone blew up once Khabib shared one opinion – and you’re all still talking about it.” (RT)