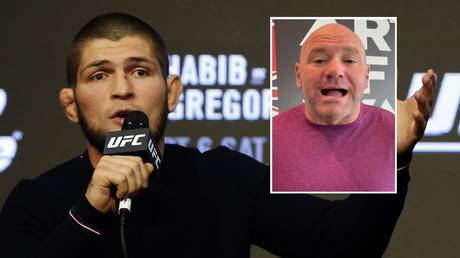 White said he would reveal all about Khabib's decision on Saturday. © USA Today Sports / Instagram @danawhite

Fresh from his much-anticipated meeting with Khabib Nurmagomedov, UFC boss Dana White says he will reveal the results of the pair’s discussion on Saturday – and the implications for lightweight rivals including Conor McGregor.

White and Khabib met on the sidelines of the UAE Warriors 15 event in Abu Dhabi on Friday night – which was co-promoted by Khabib’s own newly-acquired promotion, Eagle Fighting Championship.

Cameras followed the Russian fighter and White into a room before the door slammed shut, leaving the pair to thrash out a decision on whether the undefeated lightweight champion would return to the octagon after announcing his retirement following his emotional victory over Justin Gaethje in October.

As the MMA world waits with bated breath, White issued a statement on his Instagram account on Saturday.

“What’s up everybody, I met with Khabib Nurmagomedov last night, and today (Saturday) at three o’clock on the East Coast (US) on the ABC network, I’m going to talk about his decision and how it’s going to impact the Poirier-McGregor fight next weekend, and the co-main event (Dan Hooker vs Michael Chandler) in the lightweight division,” White said.

That set off a frenzy of speculation online, with suggestions that Khabib had officially decided to vacate his title, leaving it open to the likes of former opponents Conor McGregor and Dustin Poirier – whose lightweight bout headlines UFC 257 on Fight Island in Abu Dhabi on January 23.

There have been widespread assertions that the only fight which could tempt Khabib to return to action would be a showdown with former two-weight UFC world champion Georges St-Pierre, although White had said Khabib would have to relinquish the lightweight belt for that to be considered.

Some fans speculated that Khabib had told White he would do exactly that, paving the way for a superfight with the 39-year-old Canadian, who last fought in the octagon more than three years ago when he returned to defeat Michael Bisping and win the middleweight title.

Whatever the case, the speculation looks set to come to an end sooner rather than later with White’s announcement at 15:00 East Coast time in US (20:00 GMT).

Official Yerevan has once again demonstrated that it is far from sound thinking, Spokesperson for…

15:40 Armenia not to participate in Eurovision

14:52 Weapons abandoned by Armenians during Patriotic War found in Shusha

14:52 Russia to publish blacklist in response to US sanctions: Foreign Ministry

14:29 State agencies about overcrowding in hospitals due to vaccination

14:26 Ban vaccine export? We can do the same, French minister says, after Italy stopped AstraZeneca shipment to Australia

13:26 Ashraf Ghani to Ilham Aliyev: Your father, like the Azerbaijani people, would be proud of you

13:13 Russia may complete vaccination against COVID by autumn

12:53 Donald Trump selling one of his $64 million Palm Beach mansions

12:52 Afghan leader tells President Aliyev: ‘Like Azerbaijani people, your father would be proud of you’

12:39 Georgian expert: If we are jealous of Azerbaijan, we should not reject the Chinese vaccine

12:39 Azerbaijan approves action plan on employment in its liberated lands