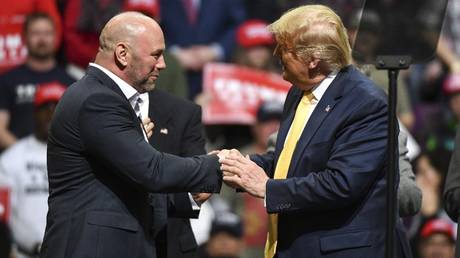 Dana White has reaffirmed his ‘very good’ friendship with Donald Trump after the US and UFC leaders met on presidential aircraft Air Force One and spoke at one of the first rallies on the President’s re-election campaign trail.

As an early backer of MMA when the sport was shunned by some authorities in 2001, Trump’s relationship with White has led to the UFC supremo becoming an outspoken supporter of the head of state, repeating the sentiments he initially expressed at the 2016 Republican National Convention.

Trump was elected later that year and White has again called the President “a fighter”, echoing the gushing praise he issued four years ago and expanding on their behind-the-scenes bond.

Read more:   Australian MP says charges against Assange must be dropped after visiting him in UK prison

“I’ve known this man for 20 years. We’ve actually become even closer since he’s become the President.

“I see a lot of things from Mr. Trump that the public doesn’t see. The people who surround me every day see how he treats me as a friend and other people he’s friends with. He’s a fighter, he loves this country, he’s doing great things for this country.”

White’s words continue a start to the year brimming with high praise for Trump from some of the most high-profile names in UFC.

In January, Conor McGregor congratulated Trump for being “phenomenal” and “quite possibly the USA goat”, adding: “Most certainly one of them anyway, as he sits atop the shoulders of many amazing giants that came before him.”

Phenomenal President. Quite possibly the USA 🐐. Most certainly one of them anyway, as he sits atop the shoulders of many amazing giants that came before him. No easy feet.Early stages of term also.Incredible.Congrats and Happy Martin Luther King Jr. day America 🇺🇸❤️🇮🇪

Welterweight number two Colby Covington met Trump at the White House in 2018 and frequently extols the President’s virtues while wearing one of his trademark Make America Great Again caps, while Jorge Masvidal and Derrick Lewis have also backed him in press conferences.

Read more:   Are aliens ignoring us? Maybe we're already their captives in a 'calactic zoo'

“When I met him on Air Force One, the first thing he said to me was, ‘how is your family?'” revealed White, who once claimed to have had a three-hour private dinner with Trump at the White House. (RT)