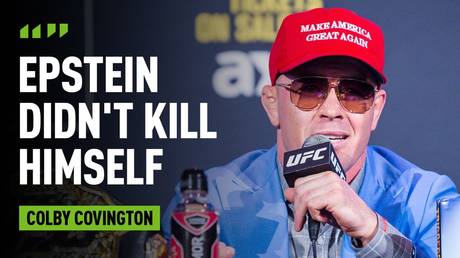 Ahead of this Saturday’s 245 PPV event, the UFC decided to try a new format activity with the title fight headliners answering questions from fans on Twitter and the media in attendance. But things got a bit weird.

First to the stage in Las Vegas, Nevada alongside Megan Olivi were the challengers who answered questions from fans on Twitter and the media in attendance. Among the trio were Germaine de Randamie, Alexander Volkanovski, and the always outspoken former interim welterweight champion Colby Covington.

For Covington, it’s been a long time coming as he prepares to finally vie for the undisputed title when he takes on Kamaru Usman in the December 14 main event.

🔥 “It’s my time” Volkanovski rates his chances against Max Holloway! Who wins?@alexvolkanovski@BlessedMMA#UFC245pic.twitter.com/MsHVKBpaKM

Never one to speak too kindly of his opponents, the 15-1 Clovis, California native has had the bad blood brewing with Usman for quite some time now. And as per usual, the fire was spat in the Nigerian champion’s direction at the Athlete Panel.

“The only thing worse than being on the Clintons’ hit list is being on my hit list and ‘Marty Fakenewsman’s’ gonna experience that on Saturday night,” Covington exclaimed after being asked what his career would be if he wasn’t fighting.

This came after Covington initially answered with quite a comedic response saying; “That’s a really tough question and I’ve thought really, really hard about that question and yeah… [Jeffrey] Epstein didn’t kill himself.”

The top 170-pound contender is obviously referring to the death of infamous American financier Jeffrey Epstein whose death via suicide has since become somewhat of a meme and conspiracy theory.

When it came to Usman, Covington had more to say as he took a dig at his relationship with Usman’s mentor, former UFC light heavyweight champion and Hall of Famer Rashad Evans.

“I think ‘Marty Fakenewsman’ needs to rehash his friendship with Rashad Evans because after I break that bitch on Saturday night he’s gonna need to sleep on his couch.”

Being the showman he is, for better or worse, Covington’s responses were straight out of the left field. When asked if he has any fighters in mind that he considers the greatest of all time, he gave the most Covington answer you could expect.

“Everybody knows I’m the greatest of all time. ‘GSP’ (Georges St-Pierre) is a bum, he’s in Canada eating poutine, I’m in America eating poon-tang!”

Often seen hanging out with models on his Instagram and in the occasional interview, this actually didn’t end up being his only reference to… well, his personal life.

As in response to what he would spend his final moments doing in the case of an alien invasion he had the following to share.

“I’d probably be workin’ on my bedroom cardio.” (RT)