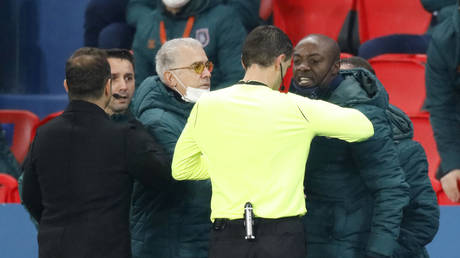 The row broke out during the PSG vs Basaksehir Champions League game earlier this season. © Reuters

UEFA has suspended Romanian fourth official Sebastian Coltescu until the end of the season after he was involved in a storm of racism allegations during the hot-tempered Champions League game between PSG and Istanbul Basaksehir.

Pierre Webo, the Cameroonian assistant coach of the Turkish champions, alleged that he had been subjected to racist comments by Coltescu after he was sent-off after a touchline spat during the Champions League group stage game on December 8. The game was subsequently abandoned after Istanbul players walked off the field, where they were soon joined by their Parisian opposition.

Also on rt.com ‘Demba Ba is the f*cking man’: Fans row as stars WALK OFF in Champions League after furiously accusing official of racism (VIDEO)

The storm was ignited when Coltescu allegedly referred to Webo as “the black one” when he was asked by the referee which member of the Istanbul Basaksehir coaching staff he recommended receive a card, with several players – including former Chelsea striker Demba Ba – reacting furiously.

Others, including PSG’s Brazilian star Neymar, also appeared angry at the incident.

The match resumed the next day with a different set of officials overseeing the fixture which the French champions would eventually win 5-1.

UEFA announced that they were to launch an investigation into the incident related to a potential violation of Article 11 of their disciplinary code which states that members must “comply with the principles of ethical conduct, loyalty, integrity and sportsmanship.”

The case was then moved to UEFA’s Control, Ethics and Disciplinary Body which recommended that they “conduct a disciplinary investigation regarding the incident and the events that led.”

It was then announced on Monday that Coltescu has been suspended by UEFA for what they described as “inappropriate behaviour during a UEFA match for which he was appointed”.

He has also been ordered to attend a relevant “educational programme before June 30, 2021.”

Suspension is the best punishment?? Then another will do the same knowing the worst is them getting suspended. Shame!!!. Sack any official involved in Racism and ban any fan or player involve it Racism then we will know the body truly wants to end Racism.

He really got suspended because he identified someone as black, what a joke

Even UEFA is going full woke now. The word “black” is not racist.

Somewhat predictably, the reaction online to Coltescu’s ban has been mixed – with some saying that the suspension was too lenient and others remarking that it was too harsh.

Read more:   US insists Belarus must accept demand for 'dialogue' with exiled protest leader Tikhanovskaya & calls on allies to back opposition

“Sack any official involved in Racism and ban any fan or player involve it Racism then we will know the body truly wants to end Racism,” one fan wrote, while another described the ban as a “joke”.

Another wrote that UEFA has gone “full woke” in their decision to issue the official with a ban, suggesting that European football’s governing body are bowing to the PC brigade.

Immediately following the December game, Coltescu took to his own social media to protest his innocence.

“Racism was never my intention,” he wrote online. “In such an environment, people sometimes cannot properly express their feelings and can be misunderstood. I apologise in the name of the UEFA Champions League.” (RT)

The Russian Foreign Ministry has summoned Poland’s ambassador to Moscow, Krzysztof Krajewski, to notify him…

Erdogan: Turkey to continue to defend truth of 1915 events

Turkey will continue to defend the truth against those supporting slander, President Recep Tayyip Erdogan…