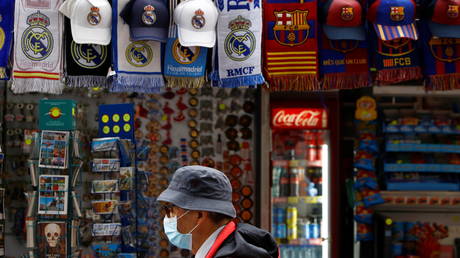 UEFA could still punish the Super League plotters, according to reports. © Reuters

UEFA is still considering imposing sanctions on the 12 rebel clubs that attempted to breakaway in a European Super League, according to reports.

On Sunday, the football world was turned on his head when the group of continental giants revealed joint plans to form their own competition, in a move that could have spelled the end of the Champions League.

Yet amid widespread backlash, the majority of the the outfits have already backed out.

But even though the ESL looks as though it will never get off the ground, punishments are allegedly being studied for its founders, according to a report by The Guardian.

Understand that Uefa is now considering imposing sanctions on the 12 clubs involved in the failed attempt to establish a breakaway European Super League. Story soon @guardian_sport

The British newspaper says it understands there is a growing desire to come down on the renegade clubs, and what type of discipline will be meted out is being explored.

Some have suggested potential bans from participating in next season’s Champions League, and the Breakaway 12, as they have been described, may be impacted by 2024 changes to the competition’s new format if a proposal to designate places based on past performances is eliminated.

Yet while UEFA head Aleksander Ceferin has threatened that the group will “suffer the consequences” for “their mistake”, others have poured doubt on them receiving little more than a slap on the wrists.

What to do with them is the tricky bit. How to do it is easy. https://t.co/LFHu6rnn41pic.twitter.com/FjWgdgLPHu

“Don’t hold your breath for something severe, after all the only thing they did was try to blow up the century old European football settlement. Doubt they’ll suffer much pain,” wrote reporter Tariq Panja on Twitter.

“What are they going to do? Ban the absentee Glazers from watching games at Old Trafford? Or Roman [Abramovich, who] hasn’t set foot in England for 2 years from watching Champions League games at Stamford Bridge?,” he asked.

Panja additionally revealed that Premier League chiefs are “also looking into sanctions against the Big Six and statute changes to prevent its clubs from being able to do something like this again, including rules to ensure teams cannot leave during a commercial term”.

14 other Premier League teams remain furious and moves are being made to kick all Big 6 reps off internal PL committees. Feeling is they used commercially sensitive information gleaned from PL to advance efforts to secure Super League.

“Fourteen other Premier League teams remain furious and moves are being made to kick all Big Six reps off internal PL committees,” it was added.

“[And the] feeling is they used commercially sensitive information gleaned from the Premier League to advance efforts to secure [the] Super League.”

Over in Spain, where its two biggest clubs are yet to formally admit defeat, La Liga supremo Javier Tebas held a Zoom meeting with leaders of the top flight’s clubs.

When asked about what action he will take against the pair and Atletico Madrid however, Tebas answered: “We do not talk about punishments. The punishment has already been [done] to their reputation.”

Tebas asked what punishments for Super League clubs “We do not talk about punishments. The punishment has already been to their reputation.”