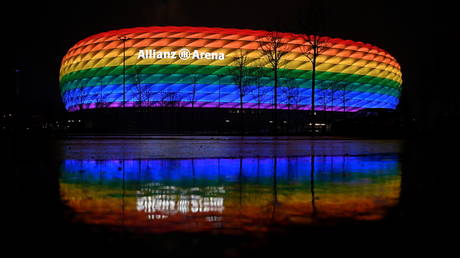 European football administrative body UEFA has been blasted for a new statement on the fallout over Munich authorities proposing the lighting up of the Allianz Arena for tonight’s Euro 2020 match between Germany and Hungary.

The request was a response to the Hungarian parliament passing a law last week that restricts the sharing of homosexual and transgender content for under-18s, and was considered a landmark victory for the Eastern European country’s Prime Minister Viktor Orban.

As Uefa also looked into investigating Germany captain Manuel Neuer for wearing a rainbow armband, it also confirmed that it would not allow Bayern Munich’s ground to be lit up in the colors.

“Racism, homophobia, sexism, and all forms of discrimination are a stain on our societies – and represent one of the biggest problems faced by the game today,” it said in a statement.

“Discriminatory behaviour has marred both matches themselves and, outside the stadiums, the online discourse around the sport we love.

“However, UEFA, through its statutes, is a politically and religiously neutral organisation. Given the political context of this specific request – a message aiming at a decision taken by the Hungarian national parliament – UEFA must decline this request.”

That was widely-criticized and, in a bid to clear up its name, the Euro 2020 tournament organizers have released another correspondence in the build-up to kick-off in the important Group F match, insisting it “respects the rainbow” while changing its profile picture.

“Today, UEFA is proud to wear the colours of the rainbow,” it claimed.

“It is a symbol that embodies our core values, promoting everything that we believe in – a more just and egalitarian society, tolerant of everyone, regardless of their background, belief or gender.

“Some people have interpreted UEFA’s decision to turn down the city of Munich’s request to illuminate the Munich stadium in rainbow colours for a EURO 2020 match as ‘political’.

“On the contrary, the request itself was political, linked to the Hungarian football team’s presence in the stadium for this evening’s match with Germany.”

“For UEFA, the rainbow is not a political symbol, but a sign of our firm commitment to a more diverse and inclusive society,” it finished.

So the rainbow is ok only if you don’t play against a country with an homophobic government?

That has only prompted a greater backlash.

“So the rainbow is OK only if you don’t play against a country with a homophobic government?,” one skeptic asked.

“The rainbow is not a political symbol except if it offends some homophobe people? Ok, Uefa – light it up, Munich,” added another unimpressed reader.

Light up the stadium! 🏳️🌈 pic.twitter.com/ewwYK7wGih

UEFA: “the rainbow is not a political symbol”Also UEFA: “you can’t light up your stadium with a rainbow because that is political!” pic.twitter.com/a651mDFWXE

“For UEFA, the rainbow is not a political symbol (how convenient) but a sign of our firm commitment to a more diverse range of income streams and the self-satisfied appearance of being inclusive.” There, fixed it. pic.twitter.com/zidiYJPq4x

“What would be the punishment if they just did it anyway? A couple of thousand euros fine? Just do it and take the hit, in my opinion,” suggested another, in regard to the Allianz and Munich City Council pressing on ahead.

“Preventing them from lighting up a stadium is as much a political decision as lighting up the stadium, but you’ve chosen the side of the oppressors,” said one.

“The NFL welcomed and supported a player coming out this week, you would never because you are too weak.”

No, it isn’t. If the reason they want to light up the stadium is in direct relation to a law being passed in another country, that’s political. UEFA have welcomed and supported diversity and inclusion and continue to do so but don’t let facts get in the way of your narrative.

A minority of voices backed the body. “If the reason they want to light up the stadium is in direct relation to a law being passed in another country, that’s political,” argued one.

“UEFA have welcomed and supported diversity and inclusion and continue to do so, but don’t let facts get in the way of your narrative.”

All will be revealed later this evening, when the world will discover whether Munich has ignored Uefa’s calls or further protests will be made by Die Mannschaft stars. (RT)