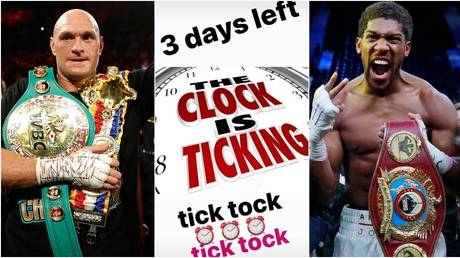 Fury stoked fears over his showdown with Joshua. © Reuters / Instagram

Tyson Fury has stoked concerns about his blockbuster world heavyweight title unification fight with Anthony Joshua collapsing, sharing an image of a ticking clock as the deadline reportedly looms to secure a venue.

Taking to social media on Wednesday evening, ‘The Gypsy King’ posted a meme alongside a string of clocks.

“The Clock is Ticking,” read the image itself, while Fury captioned it “tick tock, tick tock” and “3 days left”.

As highlighted by pundits, the upload is a reference to time reportedly running out to finalize the biggest domestic clash in British boxing history.

Or, more specifically, to secure a site deal in the Middle East that is said to run into nine figures.

In one of the most difficult agreements to broker in recent memory, Fury and Joshua have already signed a two-fight contract for the undisputed heavyweight crown.

British fans naturally want to see both bouts on home soil in a huge stadium such as Wembley.

But due to the pandemic, the first installment probably can’t take place in front of a capacity crowd until after the summer, when the majority of the UK population is expected to be vaccinated.

Also on rt.com ‘The deal could go away’: Questions raised about Fury-Joshua mega-fight as insider reveals contracts could EXPIRE in 30 days

As outspoken as ever, the Mancunian’s father ‘Big John’ Fury isn’t getting excited about anything coming to fruition just yet and claims there’s no money to put into the showdowns.

“All I can hear is ducks farting left, right, and center. The lot of them — Bob Arum, Frank Warren, Eddie Hearn, the full lot of them,” he told Boxing Social yesterday, in reference to the main promoters behind the supposed clashes.

“They’re farting worse than ducks. They can’t put it on in this climate. There’s no money for it. Nobody wants to pay that kind of money with no crowds,” he continued.

“Only the Saudis have got [the cash], and they ain’t jumping up and down to put it on, are they? I’ll tell you why: The timing’s wrong for it, the timing’s all wrong. We’ll fight, anyway, we’d love to fight. We get paid.”

Contract or not, it seems that without a venue nor a party willing to stump up the money to provide one, Joshua-Fury may have to go on the backburner once more.