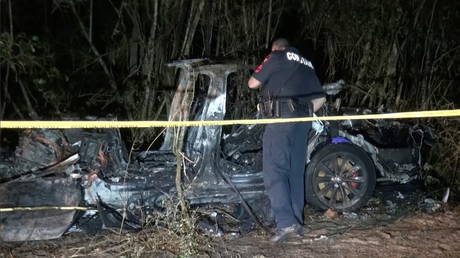 The remains of a Tesla vehicle are seen after it crashed in The Woodlands, Texas, April 17, 2021 © Reuters / Scott J. Engle

In another potential ‘Autopilot’-related accident, two people were killed in a fiery crash in Texas with no-one in the driver’s seat of the Tesla vehicle – on the same day the carmaker touted its vehicle safety record.

The fully-electric 2019 Tesla Model S had sped off the road after failing to make a turn on Saturday. It crashed into a tree north of Houston and burst into flames with the passengers trapped inside.

Local news station KPRC-2 reported that a preliminary police investigation suggested that “no one was driving” at the time of impact. One man was sitting in the front passenger seat and the other was in the back.

First responders told the station that it took four hours and 32,000 gallons of water to extinguish the flames because the vehicle’s batteries kept reigniting. Authorities even had to call Tesla at one point because firefighters didn’t know how to stop it. The Model S has been involved in a series of fires in recent years.

Read more:   Steinbach: During Karabakh war, int'l community showed it has its own agenda

As the investigation is ongoing, it is still unclear whether the car’s autopilot mode was activated. A police source told the New York Times that the wives of the victims had heard them talking about the feature just prior to setting out for the ride.

There has been no official statement as yet from Tesla, which disbanded its press relations team and typically does not respond to media inquiries.

In the wake of the accident, the tweet has attracted a mix of support and criticism, with a number of users blaming the accident on human error. Others note that Tesla was to blame for “misleading the public” by advertising “hands-free driving”.

Driver was failing to follow the laws of operating any vehicle at the same time endangering others around him. Causing his and his best friends death. Very sad but this is not a TESLA fault it’s a person fault.

It is Tesla’s fault when its CEO repeatedly advertises hands-free driving on appearances in mainstream TV and continues to mislead the public with a name inappropriate for a basic level 2 drive assist that’s still in beta.

Although Musk has already outlined a plan for “fully self-driving” cars to be made available this year, there are roadblocks to negotiate. Last month, the US National Highway Traffic Safety Administration opened probes into some 27 crashes involving Tesla vehicles.

Tesla has also been under fire for marketing its automated driving systems under the tag ‘Autopilot’, which critics say is a misleading term that encourages such dangerous behavior as sleeping at the wheel. Videos of this and other reckless behavior are available online.

Germany has already banned Tesla from using such terms as “autopilot inclusive” and “full potential for autonomous driving” in advertising materials.

The carmaker, whose website describes the autopilot mode as the “future of driving”, states that the feature allows vehicles to “steer, accelerate and brake automatically within its lane.” However, it also cautions that “current Autopilot features require active driver supervision and do not make the vehicle autonomous.” (RT)