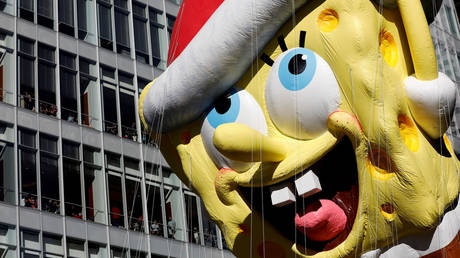 Who lives in a klavern under the sea? SpongeBob SquarePants apparently. Beloved by children and stoners the world over, the wacky adventures of the animated sea sponge actually mask a “violent,” “racist” message, one prof claims.

“SpongeBob Squarepants and his friends play a role in normalizing the settler colonial takings of indigenous lands while erasing the ancestral Bikinian people from their nonfictional homeland,” University of Washington anthropology professor Holly M. Barker wrote in his paper called ‘Unsettling SpongeBob and the Legacies of Violence on Bikini Bottom.’

According to Barker, Spongebob’s residing in the underwater town of Bikini Bottom is disturbingly similar to the US’ use of the Bikini Atoll in the Marshall Islands for nuclear weapons testing in the 1950s. This is based on a fan theory that the real Bikini Atoll was inspiration for the mutated cast of creatures that inhabit the fictional Bikini Bottom.

That’s not all though. By living there, Barker argues that SpongeBob (isn’t Bob such a terribly white, masculine name?) exercises the privilege of “not caring about the detonation of nuclear bombs.”

The character’s Hawaiian shirts and pineapple-shaped homes? Cultural appropriation. The show’s female lead, Sandy Squirrel: A token female in a world of men.

Also on rt.com Is political correctness killing fashion? Designers are speaking up against the ‘tyranny’ of the woke

Even the show’s jangly theme song, which promises children a world of “nautical nonsense,” ridicules the indigenous homeland of Bikini Bottom as a “place of nonsense,” Barker continues without a hint of irony.

Barker gets paid more than $150,000 per year to come up with this – assuming her salary is on par with her fellow University of Washington professors. And academics wonder why people consider them out of touch. (RT)