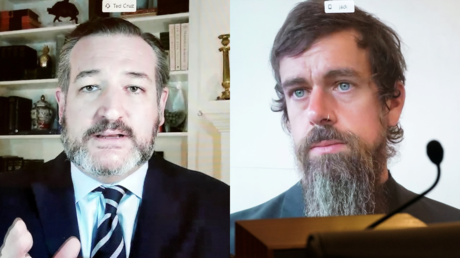 The New York Post will be locked out of its Twitter account until it deletes links to its reporting on the Biden family, CEO Jack Dorsey said. Puzzlingly, Dorsey said the paper can then repost the same links with no penalty.

The New York Post has been locked out of its Twitter account for two weeks, after it tweeted links to a series of articles that suggested Democratic candidate Joe Biden and his son, Hunter, were involved in corrupt foreign dealings. Twitter said that the story – allegedly sourced from Hunter Biden’s laptop – violated its policy against “hacked materials,” and censored other accounts including a Senate Republican account for retweeting it.

Twitter eventually relented, but the New York Post is still locked out of the platform. At a virtual hearing held by the Senate Commerce Committee on Wednesday, Dorsey told Senator Ted Cruz (R-Texas) that the paper would remain banned unless it deleted its original tweet about the story.

Here is the full back and forth between @tedcruz and @jack.Ted Cruz absolutely BODIED him. pic.twitter.com/GLqV3fSoRZ

Cruz didn’t relent, and went on to slam Dorsey for allowing the New York Times to tweet about President Donald Trump’s tax returns, even though it is “a crime, a federal felony, to distribute someone’s tax returns against their knowledge.”

“Mr. Dorsey, who the hell elected you and put you in charge of what the media are allowed to report and what the American people are allowed to hear? And why do you continue behaving like a Democratic super PAC?” Cruz ranted.

Dorsey’s reply was a simple “we’re not doing that.”

“I just don’t understand how you can label the president of the United States. Have you ever taken a tweet down from the Ayatollah?” Colorado Republican Cory Gardner asked. (RT)