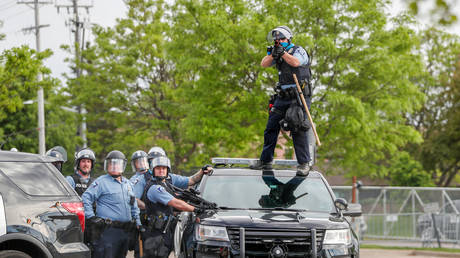 Light rail and bus transport in Minneapolis and St. Paul has been ordered to shut down as looting and riots following the death of a black man in police custody headed into the second day and threatened to spread.

Twin Cities Metro Transit had already suspended two major light rail lines serving the area around the 3rd Precinct police station in Minneapolis, after the nearby Target shopping center and several other businesses had been looted and destroyed. All other light rail and bus lines were suspended on Thursday afternoon for the rest of the day, and may or may not reopen on Friday.

Out of concern for the safety of riders and employees, Metro Transit bus and light rail service will be suspended from 4 pm thru at least the rest of Thursday, May 28 (airport shuttle and Northstar trips will operate). Update to be posted on social media channels by 10 p.m.

The announcement came after a clash between police and masked demonstrators outside another Target store in St. Paul. Local journalist Ricardo Lopez filmed people throwing bottles and shopping carts at police.

“I am really afraid people will get hurt today. This has that ugly and chaotic energy,” he said on Twitter.

The melee has started here. Things have been heating up here for a while pic.twitter.com/56MiO2ZfWZ

Riots erupted in Minneapolis on Wednesday night, as an angry mob stormed the Target on Hiawatha Avenue, right around the corner from the police station. Earlier in the day, crowds of protesters confronted police and attacked the 3rd Precinct, angry over the death of George Floyd. A video showed four Minneapolis PD officers arresting the African-American man, with one kneeling on his neck for several minutes. Before he died, Floyd complained he could not breathe. (RT)