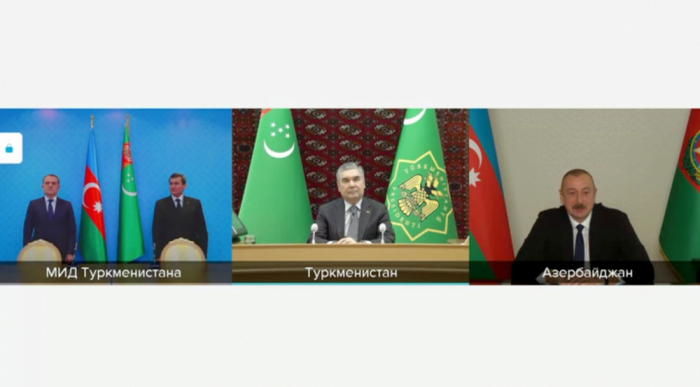 Relations between Turkmenistan and Azerbaijan are developing consistently and dynamically today, President Gurbanguly Berdimuhamedov said at a meeting with Azerbaijani President Ilham Aliyev via videoconferencing on Thursday.

The Memorandum of Understanding between the Government of the Republic of Azerbaijan and the Government of Turkmenistan on joint exploration and development of hydrocarbon resources of the “Dostlug field” in the Caspian Sea was signed during the meeting.

Berdimuhamedov stressed that the two countries successfully cooperate in the international arena as supporters of common peace, stability and security.

“Our countries share the same views on energy security, the configuration of international energy flows and the architecture of world energy as a whole, which are fundamental issues on the global agenda,” he added.

The Turkmen leader emphasized the active and effective interaction of the two countries in international organizations.

Berdimuhamedov thanked Azerbaijan for its continued support of its international initiatives and as a co-author of a number of draft resolutions of the United Nations General Assembly put forward by Turkmenistan.

The president also affirmed Turkmenistan’s readiness to support the initiatives and proposals put forward by Azerbaijan in international organizations.

“In this context, I would like to note the remarkable chairmanship of the Republic of Azerbaijan in the Non-Aligned Movement. This is further evidence of the high authority of Azerbaijan and its leadership,” Berdimuhamedov.