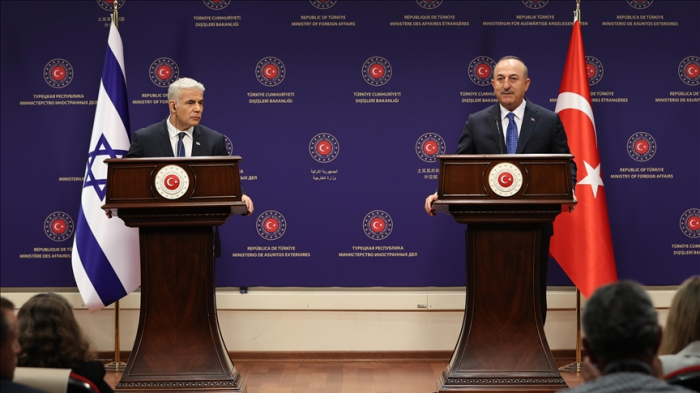 Turkiye and Israel have begun efforts to raise the diplomatic representation at relevant countries to the level of ambassadors, the Turkish foreign minister announced on Thursday, according to Anadolu Agency.

Stressing the significance of bilateral political and regional consultations, Mevlut Cavusoglu during a news conference with his Israeli counterpart Yair Lapid said the two countries will continue mutual visits as well as political negotiations at various levels.

“The positive dialogue between our countries is once again agreed to be continued with concrete, tangible actions,” Cavusoglu added.

Cavusoglu stressed that Ankara is in cooperation with Tel Aviv in fighting terror and possible threats against Israeli citizens, noting that Ankara will never allow any terror attacks on its territory.

The Turkish and Israeli ministers also addressed “steps to be taken” on economic relations, Cavusoglu noted, saying the two countries will organize the Joint Economic Commission meeting in September.

He also expressed Ankara’s desire to continue dialogue and cooperation in the field of energy.

Cavusoglu said the Palestine matter was addressed during the meetings as Turkiye expressed its “expectations and sensitives” on the issue to the Israeli side.

He reiterated the need for a two-state solution, and urged to avoid steps that may harm the peace process between Israel and Palestine.

For his part, Lapid hailed the Turkish intelligence for “foiling an Iranian plot in Istanbul,” saying Israel appreciates the Turkish government for “professional, coordinated activity.”

“Lives of Israeli citizens have been saved in recent weeks thanks to the security and diplomatic cooperation between Türkiye and Israel,” he said.

“Iran is behind these attempted terrorist attacks, the intelligence leaves no doubt about it,” he said, underlining that Tehran’s attempt was a “clear violation of Turkish sovereignty.”

He went on to say: “We are confident that Turkiye knows how to respond to the Iranians on this matter. For its part, Israel won’t sit idly by when there are attempts to harm its citizens in Israel and around the world.”

The Israeli foreign minister also commented on “returning ambassadors in the near future” and “improving economic and political dialogue” as he voiced hopes for steps in this matter to be completed soon.

On tourism, Lapid said Israel’s “immediate goal is to bring about the calm that will enable us to change travel warning for Turkiye” as the tourist season reaches its peak.

He also said: “Turkiye is the number one destination for Israeli tourists.”

“We hope that in the very near future, Israeli tourists will be able to return to Turkiye without fear,” he added.

Referring to efforts to resume flights of the Israeli flag carrier to the Turkish metropolitan Istanbul and the Mediterranean resort city Antalya, Lapid told Cavusoglu: “It is very important that in the coming weeks, we finish the process that we began during your visit in Jerusalem, to allow Israeli Airlines to fly directly to both Istanbul and the Turkish coast (Antalya).”