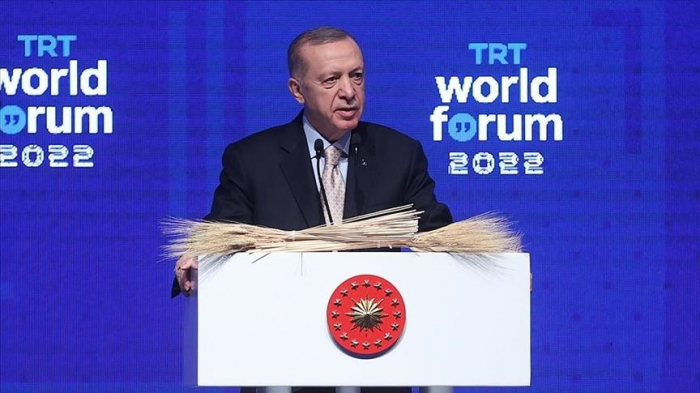 Türkiye continues its efforts to solve the ongoing Russia-Ukraine war, President Recep Tayyip Erdogan said on Friday, adding that towards this end he will soon have talks with his counterparts on both sides of the conflict, according to the Anadolu Agency.

“In order to resolve this crisis, I will have talks with (Russian President Vladimir) Putin on Sunday. Likewise, there will be one with (Ukrainian President Volodymyr) Zelenskyy,” Erdogan told the TRT World Forum in Istanbul.

Erdogan said Türkiye wants to further strengthen the grain corridor deal Türkiye helped forge this summer, “and in Putin’s words, to send (food) through this grain corridor to underdeveloped countries.”

On July 22, Türkiye, the UN, Russia, and Ukraine signed a landmark agreement in Istanbul to resume grain exports from three Ukrainian Black Sea ports, which had been paused in February due to Russia’s war on Ukraine.

Days before its scheduled expiration, the landmark grain deal was extended for another 120 days, beginning Nov. 19.

From the very beginning of the crisis, Erdogan said Türkiye carried out intense diplomacy with the principle that there will be no winners in the war, adding that Türkiye has pioneered peace diplomacy that will set an example for the world.

“While strongly defending Ukraine’s territorial integrity, we opposed fueling tension in the region with irrational policies toward Russia,” Erdogan added.

Turning to the fight against terrorism, Erdogan slammed those countries – including some fellow NATO members – who support and send weapons to terrorist groups in northern Syria that threaten Türkiye as well as regional stability.

“Despite its sacrifices, Türkiye will never forget how it was forsaken in its fight against terrorist groups that pose a serious threat,” he added.