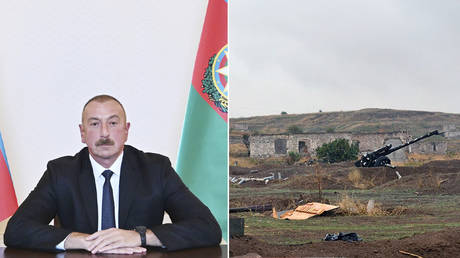 Azerbaijan will use Turkish F-16 fighter jets to defend itself from “foreign aggression,” President Ilham Aliyev said on Monday, insisting that the planes were in the country prior to the recent fighting over Nagorno-Karabakh.

F-16s are supersonic fighter aircraft built in the US by Lockheed Martin. In recent years, the jets have been used extensively, by Ankara, in battles with Kurdish insurgents, as well as in the Syrian Civil War. Famously, in 2015, a Turkish F-16 shot down a Russian Sukhoi Su-24 near the Syrian-Turkish border.

According to Aliyev, the planes are currently sitting idle in Azerbaijan and are not taking part in the war against Armenia. (RT)