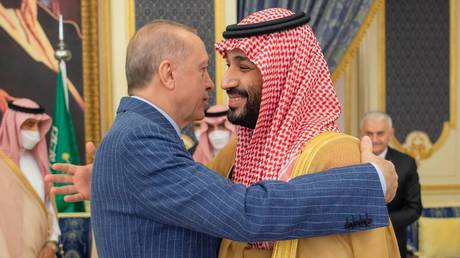 Mohammed bin Salman, the crown prince of Saudi Arabia who is widely considered to be the de facto ruler of the kingdom, is visiting Turkey on Wednesday. He is to have talks with President Tayyip Erdogan in a second meeting of the two this year after a pause since the 2018 assassination of Saudi dissident journalist Jamal Khashoggi in Istanbul.

Ankara expects “a full normalization and a restoration of the pre-crisis period,” a senior Turkish official told Reuters on condition of anonymity. “A new era will begin.”

Jamal Khashoggi was killed by a Saudi hit squad at the kingdom’s consulate in Istanbul. Ankara was angered by the fact that it was indirectly dragged into a crime, which Turkish officials blamed on the senior leadership of Saudi Arabia.

The perpetrators stood trial in their home country while the royal palace rejected assertions that Prince Mohammed personally ordered the hit. Riyadh claimed its security agents “went rogue” in Istanbul.

The diplomatic rift between the two nations was partially mended in April, when Erdogan paid a visit to Saudi Arabia and met the crown prince. Amid the reconciliation process, Ankara and Riyadh toned down their mutual criticisms. At the same time Turkey announced that it was halting the trial in absentia of 26 Saudi suspects in the Khashoggi murder and transferring the case to Saudi Arabia. (RT)