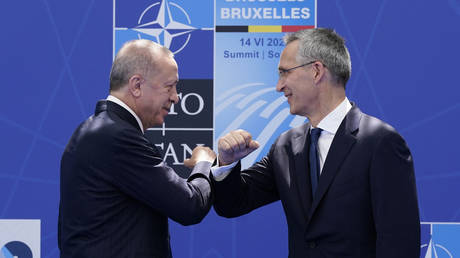 NATO needs to deal with Ankara’s objections against the potential accession of Sweden and Finland to the alliance, Secretary General Jens Stoltenberg said.

The two Nordic nations have decided to seek NATO membership, but their bids have been undercut by Turkey. President Recep Tayyip Erdogan said last Friday that his country will not support the membership bids of Sweden and Finland, as they are allegedly “harboring terrorists.”

On Monday, he said Stockholm and Helsinki shouldn’t even bother sending delegations to Ankara to discuss the issue.

Stoltenberg tweeted on Monday evening: “Turkey is a valued Ally and any security concerns need to be addressed. We must stand together at this historic moment.” He earlier expressed hope that Turkey’s opposition will not delay accession.

Spoke with Foreign Minister @MevlutCavusoglu about the decisions by our closest partners #Finland & #Sweden to apply for #NATO membership. #Turkey is a valued Ally & any security concerns need to be addressed. We must stand together at this historic moment.

Sweden and Finland have a record of granting political asylum to people from Turkey, particularly ethnic Kurds, fleeing internal conflicts. Turkey says some of these people are terrorists, and criticized the nations for hosting them.

In addition to addressing this issue, Sweden and Finland must lift restrictions on trade with Turkey to win support for their NATO bids, Cavusoglu said on Monday. (RT)