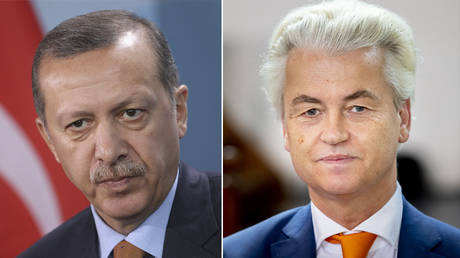 Turkish President Recep Tayyip Erdogan has filed a criminal complaint against Dutch right-wing leader Geert Wilders, after he insulted him on social media.

Wilders, the leader of the Dutch Party for Freedom, stirred outrage in Turkey on Saturday after he tweeted a cartoon of Erdogan captioned ‘Terrorist’. He followed up his public criticism of the country’s president with another tweet on Monday of a ship with a Turkish flag sinking, captioned ‘Bye bye @RTErdogan. Kick Turkey out of NATO!’.

Erdogan’s legal team filed a lawsuit with prosecutors in Turkey’s capital, Ankara, claiming that Wilders violated a Turkish law that makes it illegal to insult Turkey, government institutions, or its national heroes, citing the 104th Article of the Constitution. The law, Article 301 of the country’s penal code, was brought into effect in 2005 and has been used repeatedly by the president to prosecute critics.