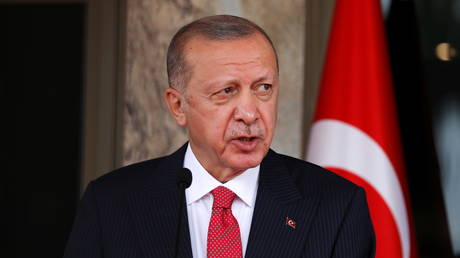 President Recep Tayyip Erdogan reportedly believes that Turkey “can’t have the luxury of housing” envoys from 10 Western nations which are opposed to the continued detention of businessman and political campaigner Osman Kavala.

The 10 diplomats were summoned this week to the Turkish Foreign Ministry over their joint statement condemning the prosecution of Kavala. He has been in custody since late 2017, fighting against a series of charges which his supporters believe to be politically motivated. The statement was signed by representatives of the US, Germany, Denmark, Finland, France, the Netherlands, Sweden, Canada, Norway, and New Zealand.

As of today, Osman Kavala has been detained for four years. His ongoing case has cast a shadow over democracy and rule of law in Turkey.Today, the United States together with 🇩🇪🇫🇷🇳🇿🇨🇦🇫🇮🇸🇪🇳🇴🇩🇰call for his release! See our full statement here: https://t.co/fCs5Lk5BCWpic.twitter.com/eyOq1loSM3

Erdogan shared his displeasure with foreign representatives during a plane trip from Africa, according to Turkish media.

“I told our foreign minister: We can’t have the luxury of hosting this lot in our country. Is it for you to give Turkey such a lesson? Who do you think you are?” Erdogan was quoted as saying.

The president added that Western nations didn’t hesitate to prosecute “bandits, murderers, and terrorists” on their own soil and they should let Turkey do the same. He rejected the claim that the prosecution of Kavala cast a shadow over “respect for democracy, the rule of law, and transparency in the Turkish judiciary system.” (RT)