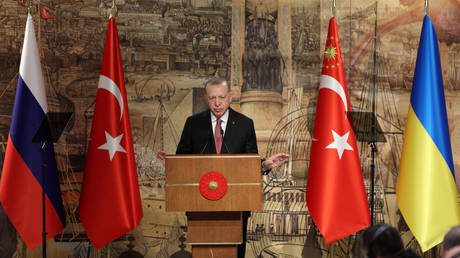 Russian actions in Ukraine cannot be justified – but they are not unprovoked, the Turkish president’s spokesman says Turkish President Recep Tayyip Erdogan speaks ahead of the peace talks between delegations from Russia and Ukraine, Istanbul, March 29, 2022. © Getty Images / Anadolu Agency / Contributor

Turkey does not follow the Western lead in sanctioning Russia because it is guided by pragmatic economic considerations and “a policy of balance,” the Turkish president’s spokesman Ibrahim Kalin has said.

In an interview with Haberturk TV, Kalin said that Ankara is pursuing “a policy of balance” when it comes to its relations with Russia.

“As we are dependent on foreign sources for energy, we develop relations with Russia as we do with Iran,” he explained, noting that Turkey also enjoys good relations with the US and other Western countries.

“We do not impose sanctions on Russia after the Ukraine war. Of course, we have to protect the interests of our country,” he said.

“We took a clear stand. At present, the Westerners have also accepted it. They do not say anything about Turkey’s position for geopolitical reasons,” Kalin claimed.

He also emphasized that his country does not support the policy of imposing personal sanctions against Russian businessmen.

“Those who are called billionaires in the West are called oligarchs when it comes to Russia. Are there no such leaders in the USA or Europe?” Kalin asked.

Kalin made it clear that his country views Russia’s military operation as an “invasion” and states it “clearly and unequivocally.” However, he stressed that Turkey continues to talk to both Ukraine and Russia as “the longer the war, the higher the cost.” 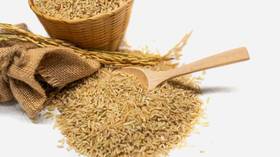 “Frankly, there is no other country that makes an effort to bring the two sides together. It will set an example that cooperation can be made on certain issues even in a war environment,” Kalin claimed.

Read more:   'Hero of Russia? What did he do?' Boxing legend Tszyu chimes in on talk of Khabib being awarded top honor

He emphasized the role Ankara was playing in negotiating solutions to certain globally important issues, such as grain supplies from the conflict-torn region.

“Who will eventually talk to Russia if everyone burns the bridges?” he asked. (RT)