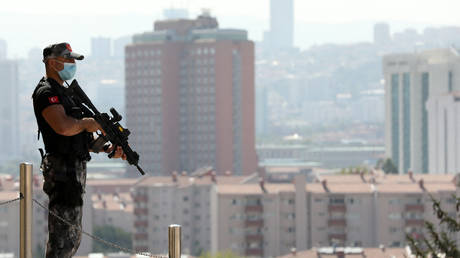 A Turkish security force member patrols during celebrations to mark the 99th anniversary of Turkey’s Victory Day, commemorating a decisive battle in the Turkish War of Independence, on August 30, 2021. © AFP / Adem Altan

Turkey has arrested 81 suspects said to be linked to the US-based Muslim cleric Fethullah Gulen, who Ankara accuses masterminding the unsuccessful 2016 coup attempt, in which over 250 people were killed.

Simultaneous operations were carried out in the early hours of Friday, leading to the arrests of 14 suspects, while 67 others were detained in 37 provinces, security sources said on condition of anonymity, according to state-owned Anadolu agency.

Prosecutors in the capital had issued arrest warrants for 125 suspects alleged to be members of what Ankara calls the Fethullah Terrorist Organization (FETO), including 29 people who had been fired or suspended from the Turkish Foreign Ministry. (RT)