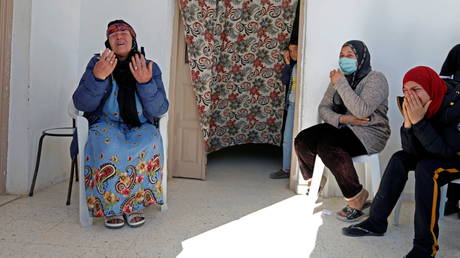 The mother of Brahim Aouissaoui, who is suspected of carrying out Thursday's attack in Nice, France, in Thina, a suburb of Sfax, Tunisia, October 30, 2020. ©  REUTERS/Zoubeir Souissi

Tunisia is investigating the existence of the ‘Mahdi Organization’, after a group by that name reportedly took credit for the attack in Nice, France. The suspect is from Tunisia but his family insists he is not an extremist.

The counter-terrorism division of Tunisia’s public prosecutor’s office has ordered a probe into whether the alleged terrorist cell, “Al Mahdi in southern Tunisia,” is real, and if so whether it played any role in Thursday’s attack in Nice.

The Tunisian press agency TAP said that the investigation was prompted by a social media post in which an individual who claimed to be part of the group took responsibility for the knife rampage that killed three people. (RT)