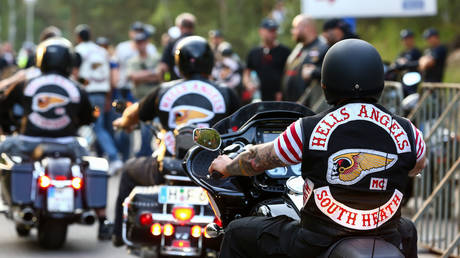 Tucker Carlson has paid his respects to the founder and longtime president of the notorious Hells Angels motorcycle club, Sonny Barger, who passed away this summer aged 83 after a battle with throat cancer.

Read more:   Azerbaijan FM: We are opening a new page of post-conflict reconstruction

The prominent Fox News host was among more than 7,000 people who gathered at the Stockton 99 Speedway in California on Saturday to attend a six-hour-long service dedicated to Barger, who had been a counterculture icon since the 1960s.

Speaking to the crowd of leather-clad mourners, Carlson began his speech by admitting that he had never met Barger personally, but had always been a fan of the notorious outlaw biker. Carlson noted, however, that he had only discovered the biker’s personal views when he

Carlson went on to question why such values were not shared by those who sit in Washington and pointed out that it should be the president of the United States who repeats those words everyday, not just the leader of a notorious motorcycle club.

Barger rose to prominence in the US after he became one of the founding members of the first Oakland chapter of the Hells Angels motorcycle club in 1957. He went on to become the public face of the group, which is currently believed to have up to 3,600 members with chapters spread across the world.

Throughout his life, Barger had numerous run-ins with the law and had been arrested on charges ranging from possession of narcotics to attempted murder, and had served several prison sentences.

While many police and international intelligence agencies, including the US Justice Department and Europol, consider the Hells Angels to be an organized crime syndicate, Barger always maintained that the club only consists of motorcycle enthusiasts and that responsibility for criminal activities lies with individual members and not the club as a whole. (RT)