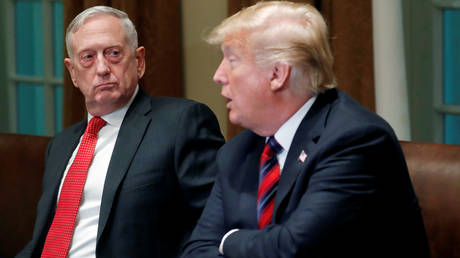 US President Donald Trump has heaped scorn on his former Defense Secretary Jim Mattis, after the general called on Joe Biden to ditch Trump’s “America First” foreign policy in favor of a “network of solid alliances.”

The president lamented not having “fired [Mattis] sooner,” insisting his administration did their “best work after he was gone” in a Tuesday tweet responding to a Fox News story about Mattis’ latest outburst of armchair-policymaking.

That says it all about Mattis. Obama fired him. I should have fired him sooner. Did best work after he was gone. World’s most overrated general! https://t.co/2i4jPWAAPA

Trump even spared a rare note of praise for his predecessor Barack Obama, admitting the Democrat had done at least one thing right – namely, firing Mattis, whom the incumbent president called the “world’s most overrated general.”

Mattis, who resigned from his post as Trump’s Pentagon chief in protest against the president’s efforts to bring troops home from Syria, had called on a Biden administration to “eliminate ‘America First’ from [the US national security strategy’s] contents” in an op-ed published Monday in Foreign Affairs. The piece was co-written with two of his Hoover Institute peers and a third think-tanker hailing from the right-wing American Enterprise Institute.

Rather than trying to wind down what even the Biden campaign and other Democrats have begun referring to as “forever wars,” Mattis argued, Washington should view the never-ending conflicts in “Afghanistan, Iraq, and elsewhere” as providing “support to friendly governments struggling to exert control over their own territory.”

“It is in the United States’ interests to build the capacity of such governments to deal with the threats that concern Americans,” the general continued, glossing over the part where US taxpayer dollars are repeatedly used to arm and otherwise fund those same “threats.” From the mujahideen in Afghanistan to the “moderate rebels” in Syria, the US has a lengthy track record of funding terrorist groups it later either fights, or leaves for others to deal with.

Instead of ending wars and shifting spending focus to rebuilding America’s decaying infrastructure, Mattis and his co-writers argued, an incoming Biden administration should “expand the cooperative space in which all countries supporting a rules-based order can work together to advance shared interests.” The term “rules-based order” has become something of a dog-whistle for NATO supremacy and a cudgel to be wielded against the US’ rivals, though Washington itself has never had a problem flagrantly violating international norms and NATO itself has a habit of demanding concessions of non-members that member countries need not submit to – such as unilateral nuclear disarmament.

Also on rt.com ‘Safer world?’ Stoltenberg calls on international community to get rid of nukes, says NATO members should keep theirs for now

While Mattis urged Biden and his team to strengthen their alliances with China’s Asian neighbors in order to keep Beijing on a tight leash, the former defense secretary also suggested the incoming president find “opportunities to cooperate with China in areas of overlapping interests, such as pandemic response, climate change, and nuclear security.” The Trump administration has torn up multiple nuclear arms treaties with Russia and is expected to let another one, the New START Treaty signed by Obama, expire next year as Moscow is unwilling to sign it on Trump’s questionable terms.